Chutz-POW! The Rest of the Exhibit

In addition to my drawing of Sophie Scholl, the Chutz-POW! exhibit at the 3 Rivers Arts Festival also features artwork from four other Pittsburgh cartoonists representing other Holocaust Upstanders. In addition to the artwork each panel features photos and a lengthy description of each of the people featured. I'm not going to reproduce the text here, more for the sake of brevity than anything else. Go see the exhibit, or if you don't have the opportunity and are interested in the stories of these Upstanders look them up. There are amazing stories here. 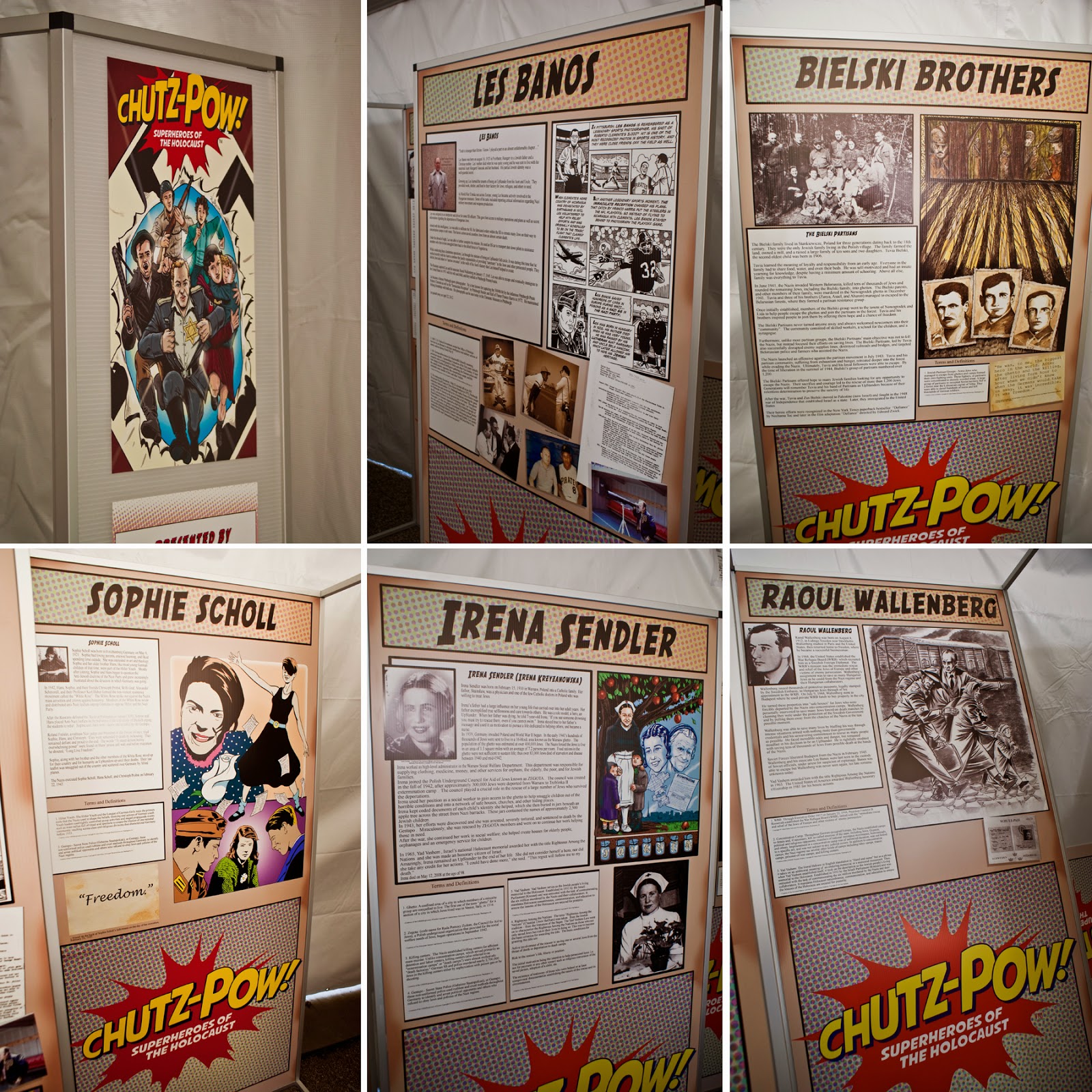 The first panel pictured here is a reproduction of the cover of the comic book that will be released later this summer. This features stories about Pittsburgh Upstanders, most of whom are not featured in the Exhibit. I'll talk about that in more detail when the book is released.


The one person who is featured in both the exhibit and the comic is Les Banos. Les's story is pretty unbelievable, and deserves a full graphic novel or movie instead of the six pages I tried to fit the info into. (That's true of all of these people, really). Les Banos is a famous Pittsburgh sports photographer. He was Jewish and during the Holocaust was part of the Hungarian Resistance. He was recruited by the Office of Strategic Services (the forerunner of the C.I.A.), and became an SS officer and served as a double agent! The artwork here is a preview of the upcoming comic.


Mark Zingarelli is a native of Pittsburgh and a freelance cartoonist / illustrator for over 35 years. He has had art studios in San Diego, Seattle and now lives in Western Pennsylvania. His award winning illustration work and comics have been published internationally and he is currently finishing a graphic novel for Farrar Strauss & Giroux.

The next panel is of the Bielski Brothers. The Bielski Partisan group led by Tuvia Bielski operating in the forests of Western Belorussia was one of the most renowned resistance groups against the Nazis in World War II. Together with his brothers, Zusya, Asael, and Aharon, Tuvia disrupted enemy lines and secured arms allowing his partisan movement to grow in numbers.

Gary Morgan is a freelance artist and illustrator. He went to college at I.U.P., and graduated with a B.F.A. in metals and drawing. His comics work can be seen in The Field at the Edge of the Woods.

Irena Sendler used her position as a social worker to gain access to the Warsaw Ghetto and help smuggle children out of the horrible conditions and into a network of safe houses, churches, and other hiding places. She issued hundreds of false documents with forged signatures, giving the Jewish children temporary identities. Irena kept records of each child’s true identity in coded form and buried them in jars beneath an apple tree in a neighbor’s back yard, across the street from the German barracks.  It is estimated that these jars contained the names of 2,500 children. In 1943 her efforts were discovered and she was arrested, severely tortured, and sentenced to death by the Gestapo.  Even under these circumstances she refused to give the Germans any information.   While awaiting execution she was saved. Irena continued working under a false identity.

Marcel Lamont (M.L.) Walker is a Pittsburgh, Pennsylvania native. He graduated from the Art Institute of Pittsburgh, and from 1993 to 1999 was an art instructor at the Pittsburgh Center for the Arts. Today he is the Artist-in-Residence at Pittsburgh’s ToonSeum, The Museum of Cartoon Art, where he teaches workshops and has contributed artwork to their NORTH and OAKLAND anthology comic-books. In 2014, Walker was the portrait artist for scientists depicted in the nationally-touring exhibit COMIC-TANIUM!: THE SUPER MATERIALS OF THE SUPERHEROES. Currently, he is also the creator/writer/artist of the comic-book HERO CORP., INTERNATIONAL, a mash-up of the workaday worlds of superheroes and the machinations of corporate America.


The final panel is of Raoul Wallenberg. Wallenberg was recruited by the US War Refugee Board. Wallenberg’s task was to save as many Jews as he could in Hungary from the Nazi regime. He was given the status of a Swedish foreign diplomat, which allowed him issue thousands of Swedish Embassy stamped “protective passports” to Hungarian Jews. The fate of Raoul Wallenberg is unknown. He was last seen with Soviet officials under suspicion of espionage. Rumor has it that he died in a Soviet Prison.


Loran J. Skinkis is a full-time illustrator and graphic designer based in Pittsburgh, Pennsylvania. After attending Mt. Lebanon Senior High in 1989, Loran joined the United States Marine Corps Reserves. His unit was activated and sent overseas to Saudi Arabia during the Persian Gulf War (1991). After returning home, Loran went to school at the Art Institute of Pittsburgh. Loran has worked on such titles as Photocopy Comix Illustrated, The Electric Owl, Pastaman, Star & Stripes, Burgh-Man, The Pittsburgh Steel-Man and most recently The Field on the Edge of the Woods.
Posted by Wayne at 7:31 AM