James Randolph was a fixture on the Waynesburg College Campus. No one called him Professor Randolph. To everyone he was simply Fuzzy. 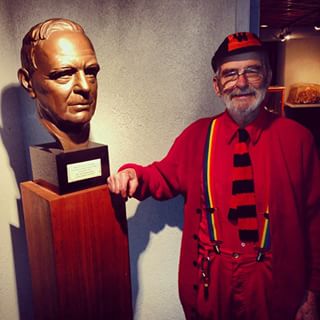 Fuzzy died this week at the age of 88. To say he was one of the most loved people I have ever known is an understatement. Everyone who ever knew him loved him. The reasons for that are very simple; Fuzzy loved life and everyone in it. This way of being was returned to him a thousandfold.


I met Fuzzy when I started Waynesburg College in the fall of 1979. He was a professor of music and I only ever had one class from him. But on a small campus he was a daily presence in the lives of everyone there. He was one of the most wonderfully eccentric people I have ever known. Fully at home with who he was. Brilliant. Humble. He wrapped warm strong arms around his whole community and you knew you were loved and safe.


I realized, while thinking of this for the last day, that my specific memories of him are few. The day he walked into the student union, unannounced, and serenaded us with his bagpipes. His hands in the fall, stained with the henna-like secretions of the wild walnuts he had shelled, because using gloves would take away from the experience. Touring the college museum that he curated and hearing the stories of decades of Waynesburg history. Seeing him around town and campus regularly in the thirty-plus years since I graduated and always being happy for the experience.


There is an overall sense of his presence that overwhelms the day-to-day. His love of learning and the childlike wonder and curiosity he shared. The many times he would just break out into song. The kind words he always had for everyone. The joy he wore for everyone to see.


For years he conducted the campus choral group, The Lamplighters. I was never a member because even though I love music you probably shouldn’t have to hear me sing. Generations of students under his care produced joyful noise.


Fuzzy was a Lamplighter, in the truest sense. In his presence there was always light and warmth. He lit a fire of curiosity and a love of learning in those around him. Whatever darkness there may be in the world can be pushed away by his example.


Rest in Peace, Fuzzy. The world is poorer for your absence, but so much richer for your journey.