If you haven't read my previous post that serves as an introduction to this topic you might want to go back or this will be out of context.

When the Chutz-POW committee was discussing the list of Upstanders to include in the museum exhibit I found myself particularly fascinated by the story of Sophie Scholl and the White Rose. Even though my primary role was as writer of the comic book (Sophie's story does not appear in it), I do draw comics occasionally and have a couple of professional credits to my name. I decided I wanted to draw Sophie's page for the exhibit.

Sophie's story, in brief, is heroic and horrific.

Sophie and her brother Hans were born in Germany and raised Lutheran. They were teens during the rise of the Nazi party and witnessed the growing abuses of the regime (this is an incredibly abridged version of what took place). They were increasingly appalled at the direction Germany was headed. They, along with a number of friends, formed a secret society called The White Rose and began a movement of passive resistance. They wrote exposes' and essays that were overtly critical of the Nazis. They printed these as flyers and discretely distributed them.

They were eventually caught and arrested.

Sophie was beheaded by guillotine on February 22, 1943 at the age of 22. Her final words were, "How can we expect righteousness to prevail when there is hardly anyone willing to give himself up individually to a righteous cause. Such a fine, sunny day, and I have to go, but what does my death matter, if through us, thousands of people are awakened and stirred to action?”

The last flyer by The White Rose was smuggled out of Germany and later dropped in the thousands all over Germany from Allied airplanes.

This story really touched me, and when I started looking for more information on Sophie I found lots of photos of her online. These kind of blew me away. She looks absolutely contemporary in most of these. Young with a funky hairstyle, happy and full of life. She could be one of the students in my class at Chatham this spring. One of my customers at the comics store. Someone I see when I go out to shows. The same age range as my goddaughter. 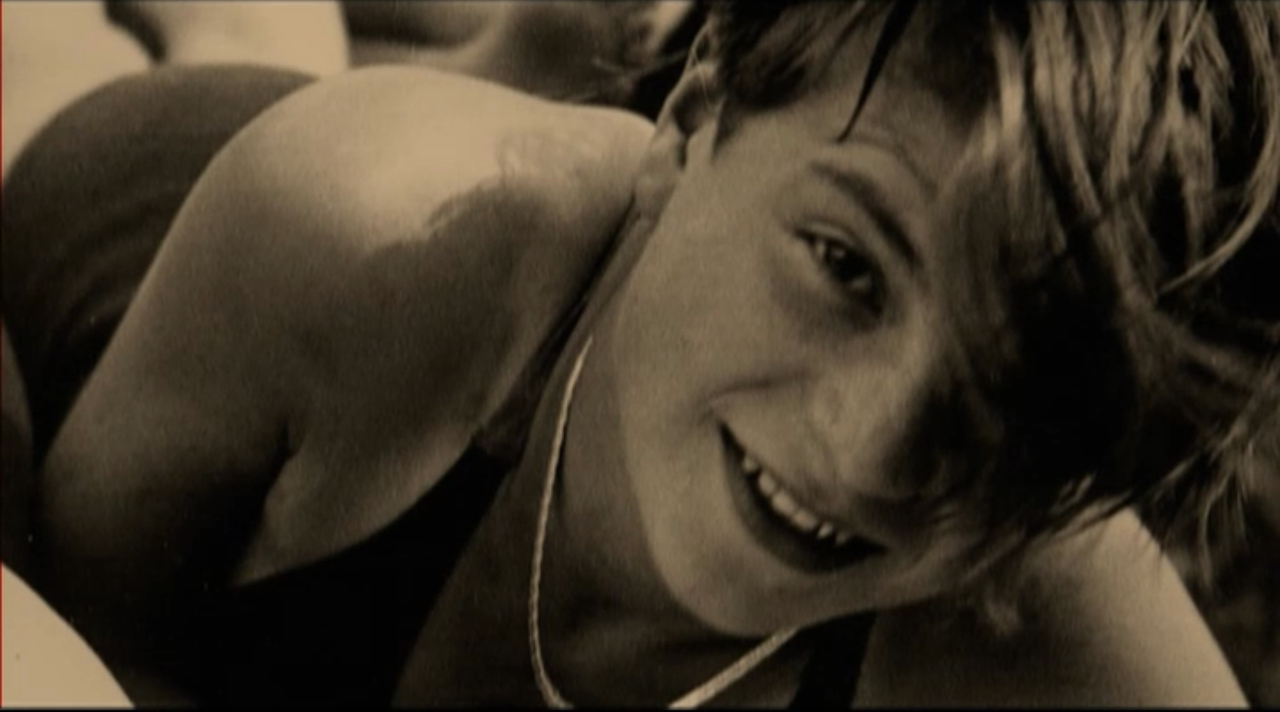 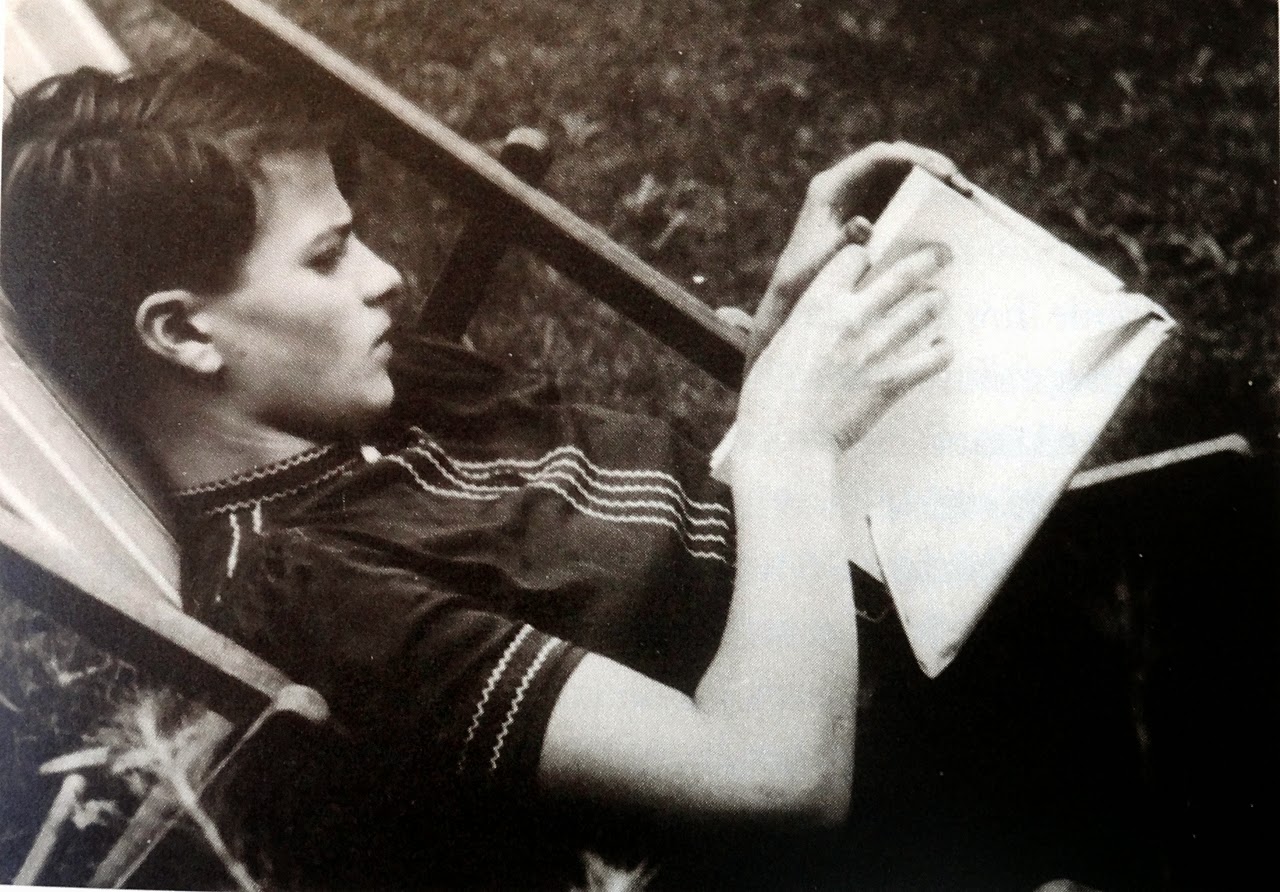 So I drew Sophie Scholl. My style leans more toward the stylized and iconic than it does toward realism. I like to think of myself as influenced by Jaime Hernandez (of Love & Rockets fame), and Dan DeCarlo and Harry Lucey, famous Archie Comics artists. I'm nowhere near as good as any of these, but it's what I aim for. The black and white line work is an abstraction and the goal was to turn Sophie into a comic book character in my style while still being able to recognize her. Parts of my composition used very specific photo reference. 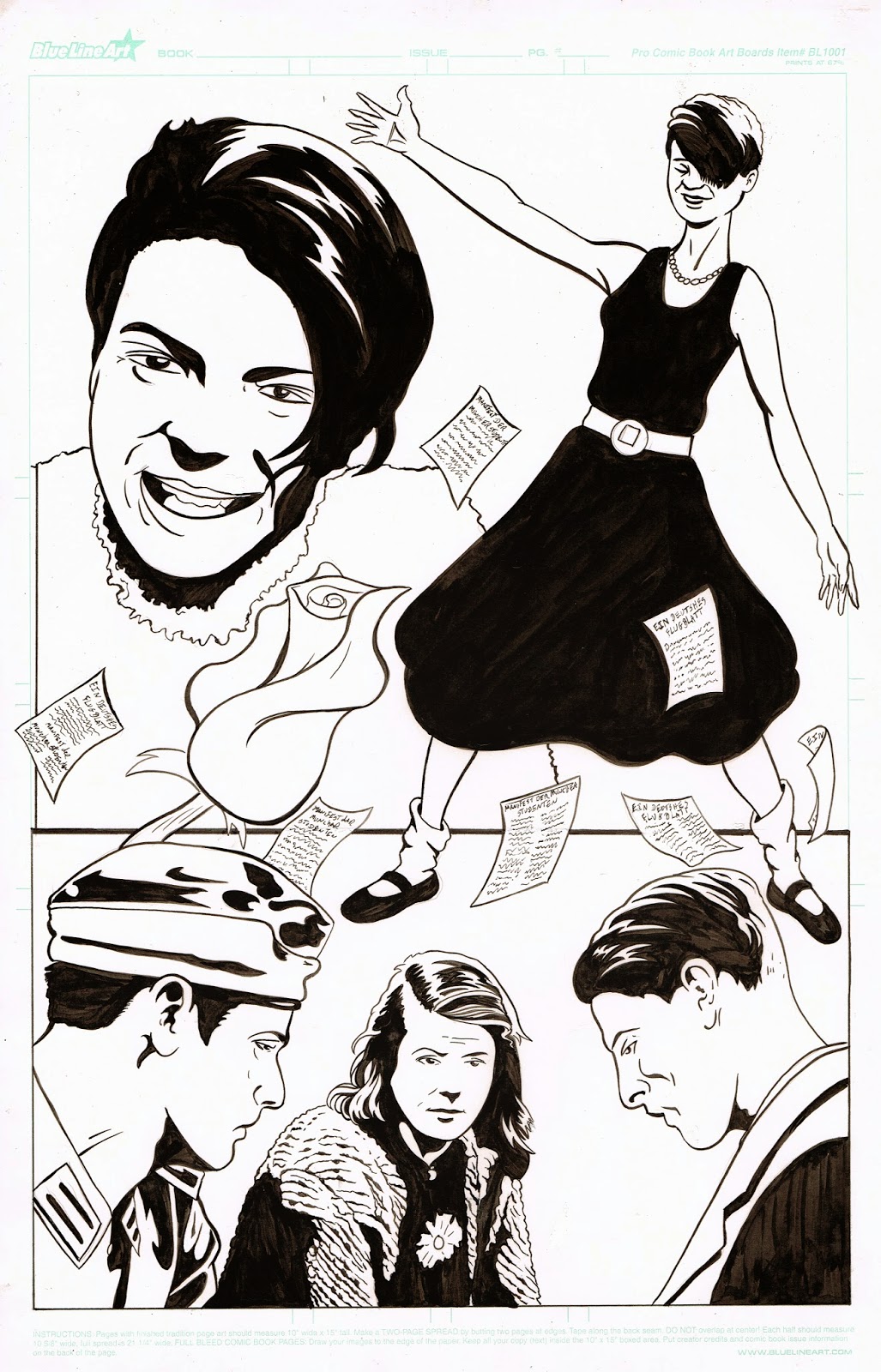 The exhibit is in color (the comic will be in black and white). I think of myself as primarily an inker when it comes to my comics work, and that's where most of my actual professional comics experience is. I love working with a bottle of ink and a brush. My own pencils are very loose because I prefer working out the details directly in the ink. As a result of this I don't work in color very often and admit to being a little intimidated by the prospect. My style lends itself to more traditional flat coloring than to heavily rendered or shaded colors, so that's the direction I went with this. I'm happy with the results. 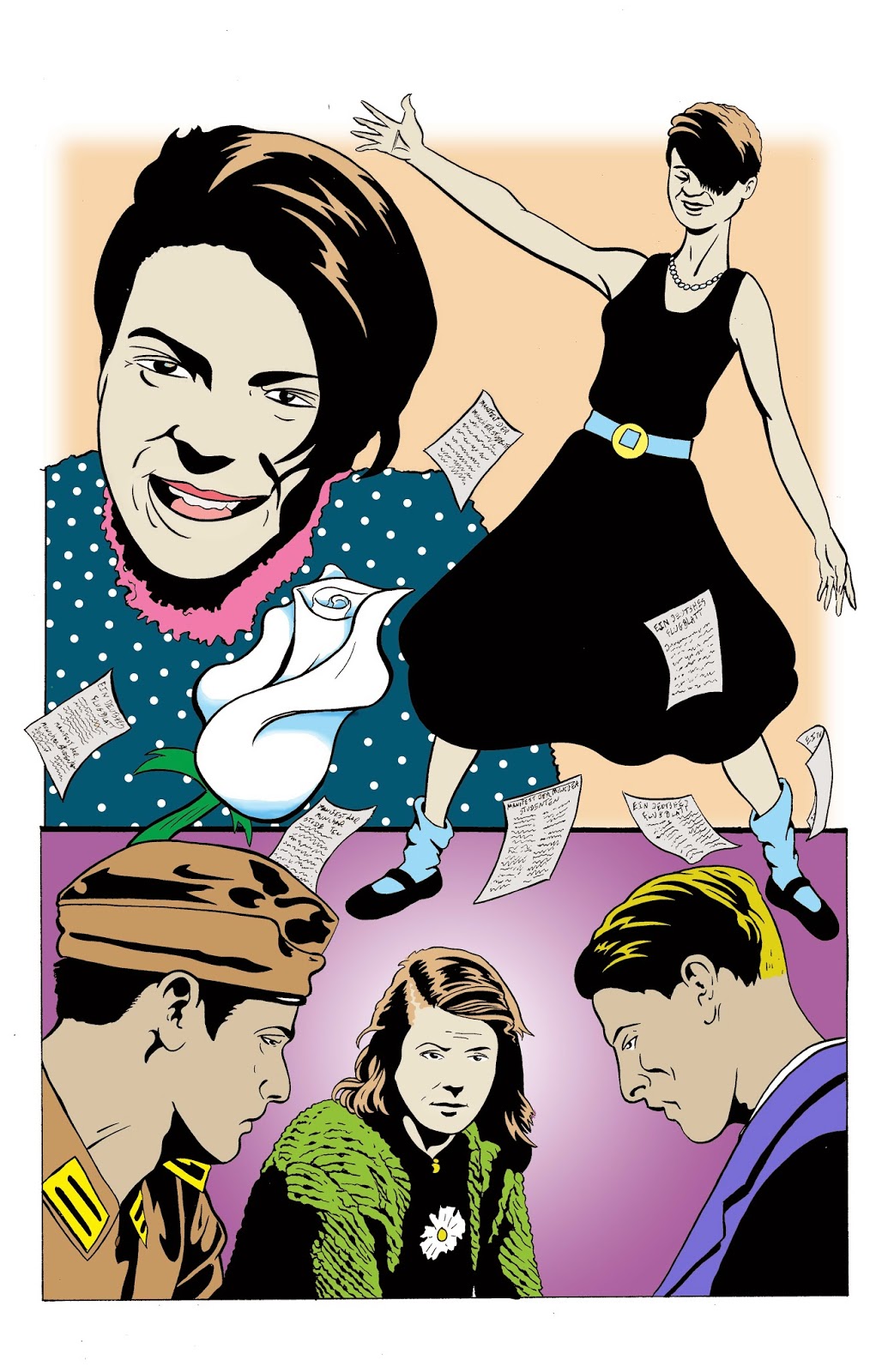 Seeing the reproduction of my art in context at the 3 Rivers Arts Festival yesterday was really rewarding. The drawing was accompanied by text pieces telling Sophie's story. Two of the other members of the Chutz-POW! committee were there when Marcel Walker (my friend and one of the artists on the project) and I arrived. They introduced us to the people who were there and we received a spontaneous round of applause. I can't tell you how gratifying it is to see something that I have worked this long and hard at finally out where we can share it with the world.

The following are photos of my Sophie piece in context at the exhibit. My next blog will detail some of the other artists and Upstanders involved with the project. 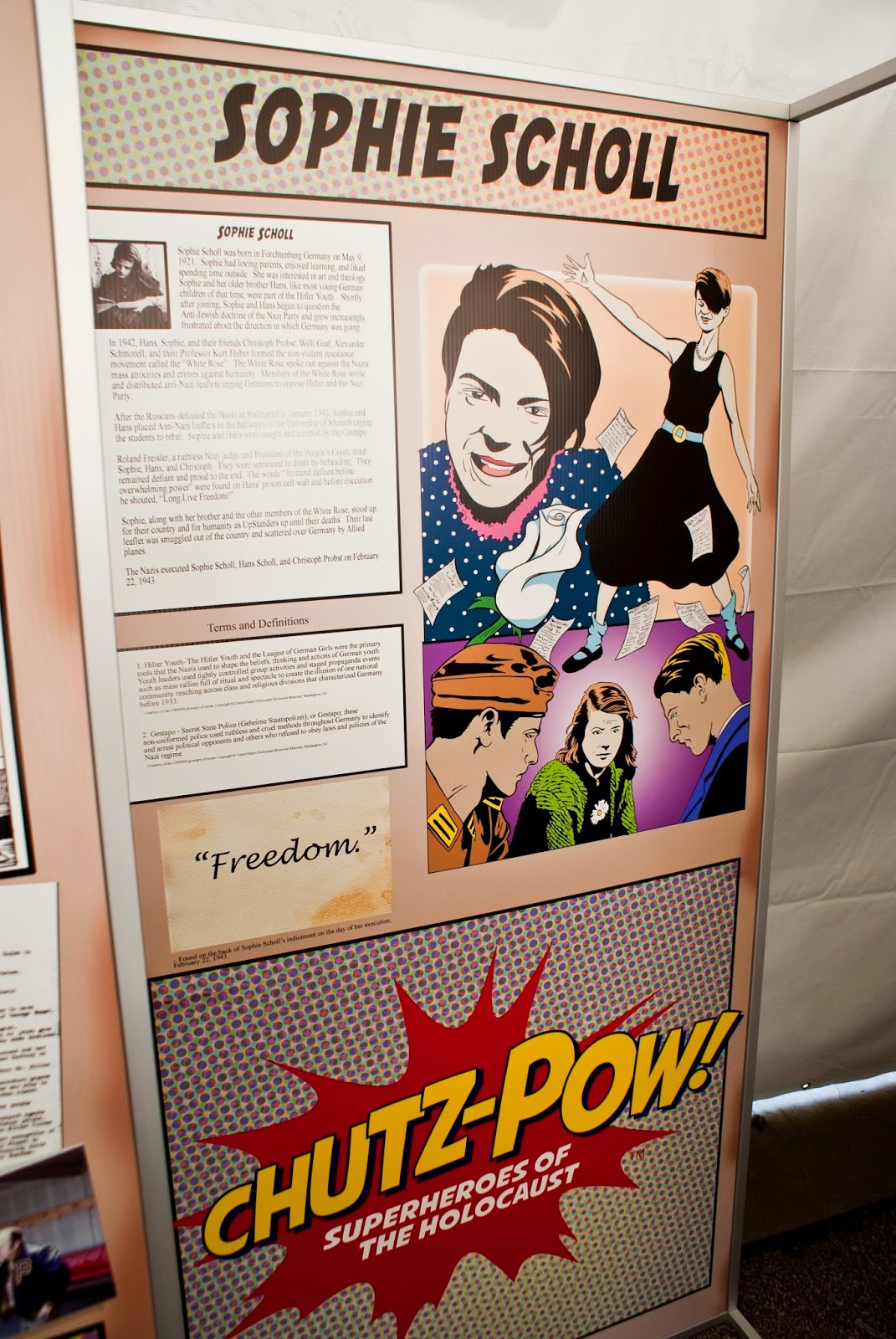 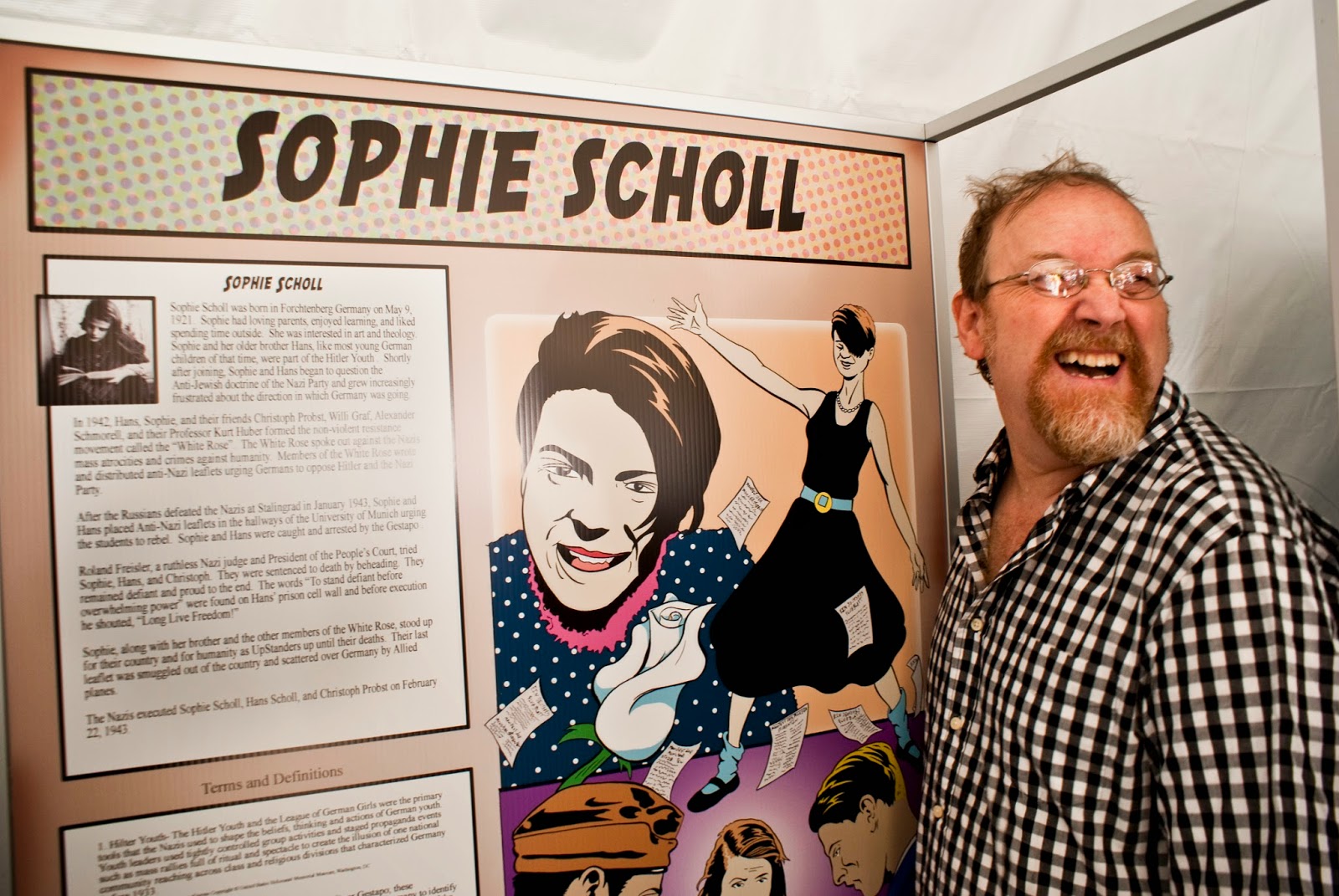 What follows is the description of Sophie's story that was sent to me by the Holocaust Center.

Word found on a scrap of paper left behind in the cell of White rose resistance leader Sophie Scholl on the day of her execution;
February 22, 1943

Sophie Scholl was born in Forchtenberg Germany on May 9, 1921. Sophie had loving parents and enjoyed spending her time outside and learning. She even had an interest in art and theology. Soon she began to question the Anti-Jewish doctrine of the Nazi Party and grew increasingly frustrated along with her brother, Hans, about the direction in which Germany was headed.

The White Rose was a German resistance group who spoke out against the Nazi regime’s mass atrocities and crimes to humanity.

Horrified of what their nation became, Sophie and the members of the White Rose wrote and distributed leaflets urging Germans to oppose Hitler and the Nazi Party.

After the defeat at Stalingrad in January 1943, Sophie, and Hans, distributed Anti-Nazi leaflets in the hallways of the University of Munich urging the students to rebel. However, the university janitor recognized Sophie and Hans and turned them in to the Gestapo, the German Secret State Police. Soon after their arrest, the Gestapo found the other members of the White Rose.

The members of the White Rose were tried by the Volksgerichtshof (People’s Court), overseen by Roland Freisler, a Nazi judge and the State Secretary of the Reich. Sophie Scholl and the members of the White Rose were sentenced to death by beheading. However, they remained defiant and proud. The words “To stand defiant before overwhelming power” were found on Hans’ prison cell wall and before execution he shouted, “Long Live Freedom!”

Sophie Scholl along with her brother and the other members of the White Rose stood up for their country and their people even before certain death. Their last leaflet was smuggled out of the country and scattered over Germany by Allied plans.

“Fight Against the Party!”

The day of reckoning has come, the reckoning of German youth with the most repellent tyranny our nation has ever seen...

For us there is only one slogan: Fight against the Party! Get out of the party hierarchy, which wants to keep us silent!

The German name will be dishonoured forever if German youth does not rise up, to revenge and atone at once, to destroy their tormentors and build up a new spiritual Europe. Students! The German nation looks to us!

Contents copyright 2014 The Pittsburgh Holocaust Center.
Posted by Wayne at 11:38 AM