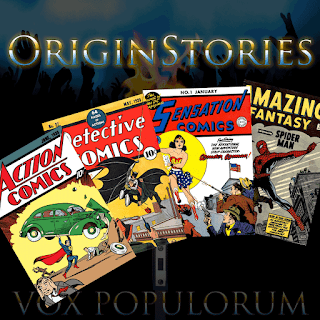 For those who haven't seen it elsewhere I have started a new podcast series with my friend and fellow comics scholar, Christopher Maverick. We'll be talking Pop Culture in an informal academic way, which basically means we want to make Pop Culture studies more accessible to Pop Culture consumers.

A few years ago while visiting friends in California I made my first trip to San Francisco. Mike and I spent the day seeing sights and eating great food and having fun. Completely fortuitously Cherie Currie, former singer for the 70s band The Runaways, had announced a concert in San Francisco the same day that we had already planned on being there. When I discovered this I called Mike and told him we were going, then bought tickets online. I wrote about that concert in more detail HERE, so that isn’t what this is about.

There were two experiences I had while waiting in line outside of the Red Devil Lounge waiting to go into the show. We were approached by a homeless man. He was the epitome of the downtrodden. His hair and beard were long, dirty and matted. He was thin and filthy, wearing clothes so ragged I’m not sure how they stayed on him. He came straight to me and I fully expected him to ask us for money and then move on.

I was wearing a t-shirt with the logo of the Glam Band The Sweet (Ballroom Blitz, Fox on the Run). Perhaps ungenerously I assumed this was just his opening line and the ask for money would come next. Nope. He enthused about The Sweet, telling me about seeing them in the 70s. He was knowledgable about them and we had a completely enjoyable conversation, just two guys who shared an interest in a specific band, swapping stories about favorite songs. For the duration of the conversation he lit up, happy to be just talking and connecting. At the end he just smiled and started to go on his way. He never asked me for a dime (though I did give him some money, which, though grateful, he seemed hesitant to take).

Just after he left two couple walked by. Older. Well-dressed. Out for an evening. One of the women looked up and saw the marquee which announced, ‟Tonight: Cherie Currie!”

‟Cherry curry?” she said while scrunching up her nose. ‟I don’t think that would taste good at all.”

Email ThisBlogThis!Share to TwitterShare to FacebookShare to Pinterest
Labels: Cherie Currie, The Sweet

Recently I was asked to participate in Publisher’s Weekly’s annual review of the comic book industry. You can read the article by Shannon O’Leary HERE. I was quoted a number of times in the article, but a lot of people, mainly my customers at Phantom of the Attic, have asked about the whole questionnaire so I decided to share it here. This really only of interest to anyone who wants to know more about the state of the comic book retail industry. My caveat here is that my answers reflect my opinions and observations based on 21 years of experience in one specific store. I don’t claim to have all of the answers or to speak for other stores. We all have different experiences.

1) What were your best selling graphic novels in 2017?

Saga continues to be our bestselling series of graphic novels for the third or fourth year now. We’ve had a lot of success with The Wicked and the Divine and East of West because they are books that a couple of our employees push pretty hard. In general the Image TPs top the list. They are self-contained series without crossovers, so people can get into a series and, quite simply, know what to read next. The introductory $9.99 price point doesn’t hurt either. We moved a lot of My Favorite Thing is Monsters. Though there are few specific standout titles in general we do really well with the FirstSecond catalog. World of Edena by Moebius did extremely well for an expensive HC. We’ve had customers regularly asking for Moebius stuff for years so the prospect of his work finally coming back into print here is exciting.

The DC Rebirth TPs increased sales over DC from the past couple of years. Marvel TPs are mostly dead stock for us. I can’t put my finger on why, other than as another indicator of the downturn in interest in Marvel. There are many Marvel trades we don’t order at all. We only move a couple of each of the X-Men TPs when they come out. The Epic Collections do pretty well with an older customer base.