There are reasons I believe in Magic.

Most of my friends and the more regular readers on my blog know I’m a big fan of the stories of King Arthur and the whole Camelot myth cycle. I consider myself a pretty well-read amateur scholar of the topic. I’ve read some of the medieval manuscripts and looked into the historical evidence (and lack thereof). I’ve read a bunch of analysis of the symbolism and mythic themes running through the literature. I’ve read a ton of contemporary Arthurian fiction. My first novel, King of Summer, is loaded with the symbols and my last novel, Bedivere: The King’s Right Hand is my version of the tale.

This weekend, my friend Marcel and I went to see Hampton High School’s production of Spamalot, the Broadway musical version of Monty Python and the Holy Grail. I have no real connection to Hampton High School, but my friend Dan Franklin teaches there. He is the director and producer of their spring plays. Dan is passionate about these projects and works his butt off with the kids. His love of what he does is obvious and his students are lucky to have him in their lives.

Two years ago we went to see their production of Young Frankenstein. Dan has always been very supportive of my art and writing, so I went primarily to be supportive of him. I’m now embarrassed to say that my expectations weren’t high. ‟It’s a high school play,” I thought. No disrespect to Dan, but the high school plays I had seen previously were pretty amateur. Young Frankenstein was remarkable! It completely changed my expectations of what a high school play could be. The level of production was one of the most professional things I’ve ever seen on stage. The talent of these kids was outstanding. To say I was blown away is an understatement. Last year they staged The Addams Family, but I had a conflict of schedule, so I had to miss it. I wasn’t going to let that happen again.

The day Dan announced that tickets were on sale I went on line and purchased. I didn’t pick specific seats, just signed up for ‟Best Available.”

When we arrived tonight we were in the first two seats in the front row, center section. Marcel asked if I had a preference, so I took the aisle seat. Seat #A101. While we waited for the show to start I randomly quipped, ‟So, I’m used to seeing improv shows. I can just yell ‛Freeze' and then go up on stage and join in, right?” Marcel said, ‟Yeah, I’m pretty sure that’s how that works.”

So, the play began. It was once again, an amazing production. The sets, the performances, the staging, the music, singing and dancing... the talent of these kids is just off the charts. Everyone on stage was good, but a couple of performances really stood out. Alex Wood played the duel roles of Dennis Galahad and Prince Herbert. Two years ago he played the monster in Young Frankenstein. He has remarkable stage presence, comedic timing, and physicality. A young man named Tyler Anderson played Patsy and I simply could not take my eyes off him. His facial expressions and body language sold his performance. His enthusiasm and joy just radiated in every line. So good!

The climax of the play approached. King Arthur, Patsy, and the rest of the Knights of the very round table found the final clue to the location of the Holy Grail. Someone had carved A101 into a rock. They weren’t able to figure it out until the Hand of God (an actual giant hand protruding from the top of castle battlement), pointed out to the audience.

The Holy Grail was under my seat.

I want to stress that I had no idea that this was going to happen and that I ended up in that seat through the magic of ‟Best Available” on the internet.

Patsy came off the stage, reached under my seat, and pulled out the Grail. He took my hand and led me onto the stage. They asked me my name, congratulated me, and asked me to strike a pose.

If you know me you know that I am not particularly shy or prone to stage fright.

They handed me the Grail and I struck a pose. 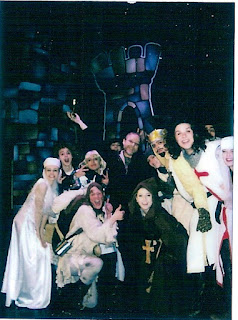 Patsy led me back to my seat and the play ended with their final number. The sheer unlikelihood of all of this, the synchronicity of it...

There are reasons I believe in magic.

There is not an online version of this available, so I've posted a copy of it below for your reading enjoyment.

Thanks, Fran. Thanks also to Evelyn Pryce (Kristin Ross), another local author who recommended me to Fran. 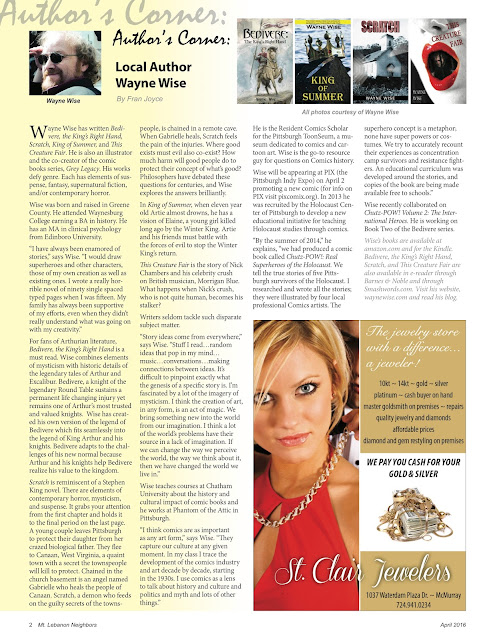