This week I have found my faith in humanity restored a little. Not that I'm ever the complete curmudgeon. I tend to be the optimist and believe the best of people. I usually believe that most people, when it comes right down to it, genuinely care about other, their friends, family and community if not the rest of the world. But, there are times when watching the news or reading news reports about the horrible things that take place every day that it is difficult to maintain that positive attitude. The recent political climate and the mean-spirited discourse that defined it hasn't helped. This post isn't about that at all, so I don't want this to become a political rant. My leanings are pretty obvious to anyone who knows me. But there was a polarization and overall nasty tone to the whole that neither side is innocent of. I'm also kind of appalled by the general level of snark that infuses much of what I see in people's personal posts, on Facebook or message boards or comments sections or whatever. The continual complaining gets tiresome when we live in a world that our ancestors from not very long ago would consider miraculous and filled with magic.

Anyway, the first part of this story is part of the ugly side of things, and there are no words to describe how sorry I am that this occurred.

Last weekend an acquaintance of mine, Dave Whaley, was assaulted on the Southside of Pittsburgh. I say acquaintance because while I've known Dave for years I can't say I know him well. He works at a music store I have frequented for a long time. He is a local musician I have seen play over the years in various bands. He is very close friends with people I am very close friends with. He is a fixture in the larger Pittsburgh community I consider myself to be a part of. Dave is one of the quietest and nicest people you will ever meet.

I saw him last Saturday night. I was out with a group of friends at a restaurant/bar. The place featured Karaoke, and while that's not why we chose this place we had a lot of fun. Dave wasn't part of our group, but he had stopped by our table to say “Hi.” While we were putting on our coats and getting ready to leave someone was performing Fairies Wear Boots by Black Sabbath and I was amused to see that Dave and I were the only people in the audience who were singing along (quietly and to ourselves, of course).

About a half an hour later Dave was assaulted on his walk home.

From what I gather a car flew through a red light and came very close to hitting him. Dave yelled for the driver to slow down. I have a tough time imagining Dave even yelling at someone, so I doubt it was much more heated than that. The driver stopped, got out and cold cocked Dave in the face, knocking him unconscious and breaking his orbital bone in a couple of places. 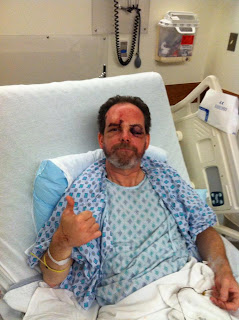 You can read the news story HERE.

There is not a very good description of the assailant, so unfortunately it seems the chances of catching him are remote.

Dave was hospitalized and had surgery on Tuesday. He's home now and by all accounts is doing well. As a musician and someone who works at a small independently owned business he does not have insurance. In addition to the pain and physical and emotional trauma this experience could lead to financial ruin. One punch by a drunken, rage-filled moron could destroy a man's life.

And here's where my faith comes back...

The outpouring of support from Dave's friends and the wider community has been phenomenal. A Dave Whaley Support page was set up on Facebook. There is a website called Youcaring.com that's like a Kickstarter for healthcare. In a little over 24 hours the site had collected $8000 to help pay Dave's medical expenses (and as of this posting there is still time to donate... go to Dave's page at http://www.youcaring.com/medical-fundraiser/Dave-Whaley-Medical-Fund/26029). This money is all from private donations from people who care about Dave.

But that's not all. There are at least five local events planned as fundraisers. Local bands donating their time to help one of their own. I heard there was a tattoo/piercing shop that would donate the entire cost of a piercing if the customer mentioned Dave. A restaurant gave 15% of your bill to the fund if you mentioned Dave. T-shirts supporting him are being sold and the printing cost of them was donated. 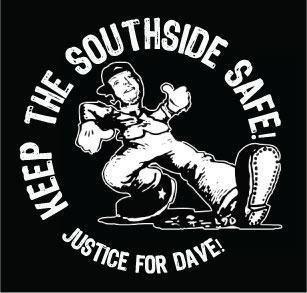 Many Southside bars, restaurants and other establishments have banded together to raise awareness of violence and crime in their neighborhood in response to this incident because they realize this effects them all. Dave is going to need ongoing post-surgery vision rehabilitation, and someone found a specialist willing to donate the service for free, sort of a medical version of pro bono work.

While I am pained that this incident had to happen I am so proud of my community, my friends and my city. This is what it means to take care of each other. When it's someone you know and care about it's easy to justify helping to pay for their healthcare. It's easy to see how a single moment in someone's life can destroy them financially. It's a real person with real value and not an anonymous statistic. This is not about politics, it's about being decent human beings. It's about recognizing this could happen to anyone and any of us could find ourselves in a similar situation in a heartbeat. One minute you're singing a Black Sabbath tune and the next you're unconscious on the sidewalk.

Why can't we be this caring and supportive of everyone?

Other than Dave there were two kinds of people involved in this incident. One was a rage-fueled asshole who didn't care about anything other than his own hurt feelings and self-importance. The other kind is the multitude of people who showed they genuinely care about the well-being of another human being. We need to extrapolate this personal connection to a specific person to the world at large.

Who do you want to be... A rage-filled asshole or someone who understands we're all in this together?

New 5-Star review for my ebook Scratch on Amazon!

5.0 out of 5 stars A wonderful, rewarding read.,
By
Special K "Kegg" (Pittsburgh, PA) - See all my reviews
Amazon Verified Purchase(What's this?)
This review is from: Scratch (Kindle Edition)
I first started reading scratch because of the free, relatively lengthy sample that was given and almost immediately found myself sucked into the believable, yet slightly mystical world that Wayne Wise had crafted. I was hooked, and at the extremely affordable price, dove right in.There is nothing not to like about this novel. There's great characterization, plot progression, the pacing feels consistent and doesn't drag, and the story ends just as one expects it to given how it unfolds before the conclusion. By far, what stood out most to me were the characters. You'll almost immediately revile Billy, laugh with the adorable Michaela (Mike), empathize with Adam's personal journey of discovery, shake your head at Shelly's pettiness, admire the charming Jack, respect Caroline's wit, and so much more. You may even find yourself liking minor characters like Joe and Elmer.The journey that Wayne Wise takes you in surprisingly packs quite an emotional punch, and I was not expecting this given the sample. While there is a "supernatural thriller" aspect to this story, it is the human characters and their interactions that make this book so compelling. They run the gamut of emotions such as: fear, selfless love, heartfelt anger, deep-seated bitterness, duty, regret, and the like. This makes them both personable and relatable. It feels like you're right alongside with them as their paths intersect with one another's in both predictable and not quite so predictable ways.Mr. Wise's personal knowledge, love, and respect for the areas visited shine through with descriptions that make you want to visit the Record Cavern on Craig Street or the beautiful mountains of Canaan itself.Take the plunge. You can read this wonderfully written work that's the right combination of heart, child-like awe, humor, and mysticism, just to name a few ingredients. PARENTAL ADVISORY : For the parents out there, I'd say this one is for young adults and older as there is a bit of profanity, some sexual content, some violent situations, and potentially scary supernatural portions. That being said, none of the above feel forced or excessive and only make the emotional impact that much more compelling. Treat yourself to this underpriced gem. You won't be disappointed.
Posted by Wayne at 5:23 PM 0 comments

I just found two 4 star reviews for my ebook Bedivere: The King's Right Hand on Goodreads.

One of them posted a review as well.

"I very much enjoyed this book, the author really made the character of Bedivere come alive and all the characters were well drawn, with the likable ones being very likable.I haven't read an Arthurian tale that focuses on the view point of someone who knew Arthur from the beginning but not as king, so this was a fresh take on events from my point of view.Since this is referred to as Book One, I hope that more is to come and will look forward to reading how Arthur's reign turns out and how the author deals with the well-known legends."
Posted by Wayne at 12:55 PM 0 comments