I saw Alice Cooper at Stage AE in Pittsburgh last night. Anyone who knows me knows that Alice has been one of my favorite performers since I was very young. I blogged about my lifelong fandom last summer, the last time I saw Alice. You can read that post HERE.

I've seen Alice more than any other big name musician, and he never disappoints. His live show is an amazing piece of theater, and at forty-plus years into his career Alice is still a vibrant performer with an amazing stage presence. This time was different, though. This time I got to meet him.

I was actually considering skipping the show this year. As much as I know I will have a good time, I had just seen Alice a year ago at the same venue. Things have been pretty busy in my life, so I was putting off buying tickets (knowing full well that I would probably cave on the day of the show and go anyway). But providence stepped in in the form of my friend Abby Krizner. I've known Abby for going on ten years now. She was guitarist and one of three vocalists for local band The Motorpsychos for several years and now fronts Fist Fight inthe Parking Lot. Since I've known her she has also become DJ at The X (WXDX), Pittsburgh's hard rock station. Abby came out to hang out with me on my recent birthday weekend and tucked into a beautiful card with a touching note were two tickets for Alice (the tickets were awesome, obviously, but the note from Abby was beautiful and in the big picture of my life, more important).

So I planned on going. Yesterday around noon I received a phone call from Abby telling me she had managed to get my name on the guest list for the post-concert Meet & Greet! Okay, maybe this is more important than the heartfelt note of friendship. Whatever, I owe Abby big time.

So I went to the show. Alice was awesome, as always. Any specific review of the show I could give would just be repeating myself.

I do want to make a brief detour to mention the opening band. Blue Coupe is comprised of Dennis Dunaway, the original bass player for the Alice Cooper Group back in the 60's, along with Joe and Albert Bouchard, founding members of Blue Oyster Cult. They rocked the place down. They played a lot of new material as well as some BOC classics like Godzilla and Don't Fear the Reaper. They have a new album out. Go to their website and give it a listen.(http://www.bluecoupeband.com/BlueCoupeBand/Welcome.html).

When the show was over we made our way over to the line for the Meet & Greet. It was, of course, mass confusion to begin with. There were several levels of guests to sort out. Some were on the guest list as friends and family of the band. There were winners of radio contests. There were the holders of special, really expensive VIP tickets who got a lot of swag as well as getting to meet Alice. I confirmed I was on the list, got my pass and eventually got in the line I was supposed to be in. 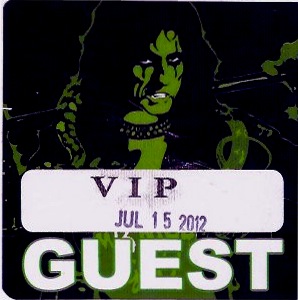 Then we waited. There were a lot of people there, and Alice is gracious enough to do something like this for his fans late at night after putting on a high energy show, so I was fine with the wait. Apparently not everyone feels the same way. A few people showed up really intoxicated. It's an adult show. They sell alcohol there, so of course people are going to drink. But really? You get the chance to meet Alice and you show up too drunk to stand straight? It's no big secret that Alice is a recovering alcoholic, so just out of a little bit of respect for him, this seems like a bad idea. Luckily, the Stage AE staff were all over this. I watched as the Events Coordinator simply peeled their VIP stickers right off their shirts and had them escorted out. No muss, no fuss, taken care of before anything got out of hand. I heard some slurred mutters of “This is total bullshit!” but there was not a scene. Bravo to Stage AE.

Our line finally started moving (and when I say “finally” it had only been a half an hour or less). We moved up a staircase next to the stage and were ushered into a hallway, where we waited again for a short period. Right around then the couple in front of us, who up until this point had been fine, really started bitching.

“I tell you what,” she said, “I'm giving them about two more minutes to get this line moving or there's going to be trouble!”

Really? I'm thinking the only trouble is you being escorted out and blowing the whole reason you're here. This event isn't about you. You're not the only person here. And really, even if you won a contest or something, Alice doesn't really owe you anything. He's doing this because he does appreciate his fans. There were a lot of people looking forward to meeting him, and from my perspective, Stage AE did a remarkable job of herding cats and keeping things moving and organized. Sorry this opportunity is taking time out of your precious life. You have an opportunity to meet a music legend, someone you are apparently a fan of, and this half hour inconvenience is enough to make you pissy and snarky?

Well, luckily for everyone I suppose, the line started moving in a couple of minutes and we were spared your scene.

We entered what looked like a small kitchen area that led into another room. From there I caught my first glimpse of Alice. He was shaking hands with everyone and had a photographer there taking pictures, free of charge, to send to our email addresses. They also allowed everyone to take their own pictures.

I wasn't really nervous. I thought I would be. Alice has been on the top of my list of favorite artists for a long, long time. But, I'm not twelve any more, and I've met and/or interviewed a lot of other musicians and big name comics creators over the years. So I didn't feel the nervous butterflies I expected to. I was happy and excited, but not enough to be stupid.

My turn came. Alice shook my hand and immediately commented on my shirt. The image comes from the comic book adaptation of his Last Temptation album, written by Neil Gaiman and illustrated by Michael Zulli. It's a one of a kind t-shirt, made for me by my friend Marc Greisinger. We had a very brief conversation about this, because even with Alice Cooper my conversations revolve around comics. He seemed pleased when I told him my 89-year-old mother had told me earlier in the day to “Make sure to tell Alice I said Hi.” He put an arm around my shoulder, we took a couple of pictures, and then it was over. 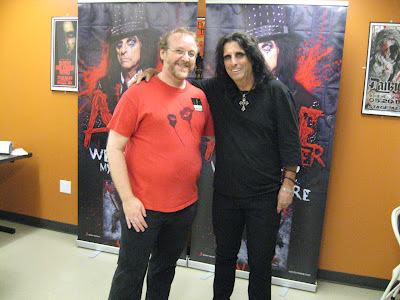 I didn't expect more, and I am thrilled to have had this opportunity. Alice was genuinely nice, and for all of the production line nature of the event it didn't seem like he was just going through the motions. I think Alice appreciates his fans and feels a real connection to them. This is his way of giving back to the people who have supported his career. I think he loves his life and loves his fans.

For all of his dark imagery over the years it wasn't Alice who was the monster last night.
Posted by Wayne at 5:48 PM