I saw Alice Cooper last Friday night at Stage AE in Pittsburgh. Alice is the first rock star I ever really got into, and the act I have seen most often in my life. I'm not sure what my first real exposure to Alice was. My parents were older and listened primarily to country music radio, so I wasn't hearing rock in my home very much (though we did watch a lot of variety shows like Ed Sullivan, so I did see a lot of them on TV). I remember a poster of Alice, a picture of him hanged, on the wall in the record section of our local G.C. Murphys department store in Waynesburg, PA. I can't imagine how this was allowed in our little provincial town, but the image was both shocking and alluring to my ten-year-old mind. 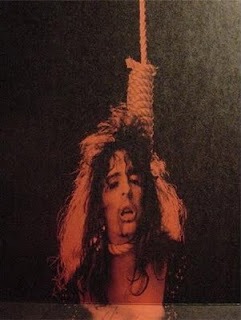 This was the inside of Alice's 1971 album Killer. This may have been the image on the poster. It seems likely, but I'm not sure.
The first Alice song I remember is School's Out (and to this day the opening riff makes me 12 again). I don't really remember hearing it on the radio, though I probably did. There was some sort of Greatest Hits of 1972 album in the band room at school and School's Out was on that. The only other song I remember being on this album was Summer Breeze by Seals and Croft. This was seventh grade for me, 1973 and 74, so it was a while after these songs came out.


I remember seeing him on the Phil Donahue Show around this same time (the internet tells me it was in 1975, so actually a little later than this). Donahue was a daytime talk show. In my memory the audience was full of middle-age to older women who were fairly hostile to Alice when he first came on stage. Alice was charming and well-spoken and by the end of the program he had won most of them over.
At the end of seventh grade we had some sort of end of the year school program. The chorus sang a couple of songs, the stage band performed, and somehow I talked the teacher into letting a couple of friends and me end the show with a lip-synched performance of School's Out. I played Alice, of course. I had applied Alice's signature makeup, wore a long, brown wig, and carried a large rubber snake. I stood in the back of the auditorium while the rest of the “band” set up. The principal, a man I would later have a few philosophical conflicts with, walked in and saw me. I don't think I imagined the look of disdain from him. When the opening riff blared through the sound system I ran down the aisle and leaped onto the stage, launching into my performance. Pretty silly, in retrospect, but I had fun and the kids loved it. There's a reason this song was, and still is, an anthem everyone relates to.
And no, there really aren't any pictures from this event that I have ever seen.
As I've said on this blog before, I'm pretty sure a lot of my early musical tastes were influenced by my love of comics. Alice is a prime example of this. He wasn't a superhero, but he wore costumes and was definitely a larger-than-life character. His stage shows were full of spectacle. Monsters and giant spiders and various instruments of death. He took the darkest elements of our psyche and put them on display with a sense of humor and incredible panache. He was an EC Horror comic come to life, and when Marvel Comics did an Alice Cooper issue of Marvel Premiere the cover was an overt tribute to EC. 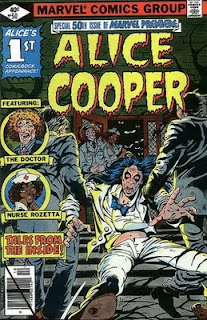 Fred and I took the name of our comics partnership,
The Fragile Elite Studio, from a lyric on Alice's From The Inside album.
I bought the single of Only Women Bleed. It was getting a lot of radio play at the time, and showed a softer side of Alice. There was the obvious and taboo double meaning of the title (a little lost on me at the time... I was fairly naïve about the physical ways of women at the time), but wrapped up in the lyrics was an overt message about the nature of abuse. The b-side of this sensitive megahit was Cold Ethyl, a song about necrophilia. Coupling this with Only Women Bleed was an amazingly seditious act. The single sold in the millions to unsuspecting teens like me.
I was happy to see these two songs performed back-to-back last Friday.
I didn't see Alice live until 1986. Alice had taken a few years off to get his act together after a life-long battle with alcohol. He hit the road on his Constrictor tour, stronger than ever, and hasn't slowed down since.
I've seen him perform his giant, full-theatrical stage shows, and I've seen him stripped down with only a band and a few props. The Pittsburgh show was somewhere in between, but it didn't disappoint. He is still a charismatic performer, and while maybe not as shocking as he once was it pays to remember that the whole concept of rock theater began with him. I was thrilled when he and the rest of the original Alice Cooper Group band were inducted into the Rock and Roll Hall of Fame this spring. It was long over due.
I've written a couple of articles about Alice back in my journalism days. Both are actually still available online. The first one originally appeared in In Pittsburgh. If I still have a copy it is buried in the deepest archives. Luckily, some Alice fan out there has seen fit to include it on a site dedicated to articles about Alice. You can read it here.
For awhile I wrote DVD reviews for an amazing site called Fulvue Drive-In. I reviewed Alice Cooper Live at Montreux. If you poke around the site you'll find a number of my articles on various things.
Alice and his songs allowed me to look at the dark things in life in a safe and fun way. But he also taught me lessons. For those of you who didn't immediately go read my old articles, the recap is this; Alice's shows are, in the tradition of classic Horror, morality plays. The character of Alice does horrible things on stage, but he is eventually caught and punished. Alice has died by Guillotine and by hanging and by electric chair thousands of times. He pays for his crimes. After this bloody climax to his show he reappears, usually dressed in white, reborn and purged of guilt. Alice is the son of a Methodist minister and a Christian. The extremes of his imagery is not about embracing the darkness in society, but exposing it, and by doing so, bringing it into the light where it hopefully cannot survive. Alice is a Rock and Roll villain, but by his ritual sacrifice at every performance gives us hope that good wins out in the end.
Posted by Wayne at 5:06 PM