Ten years ago or so I wrote and drew two short comic strips detailing the misadventures of myself when I was a child. I intended these ‟Little Wayne” tales to be an ongoing series, to be collectively titled Misspent Youth. I drew them in a different artistic style than what I usually do. My goal was to emulate some of the great ‟Little” comics series of the past like Little Archie, Little Dot, and Little Audrey, as well as strips like Richie Rich. While I was mostly happy with the results of the two I produced the art style never clicked for me. I began work on a third one, but ended up really hating the art I was producing for it, got frustrated, took a break, and never went back.

It’s unfortunate, because I think I had some good ideas. I had a list of autobiographical memories that dealt with nostalgia, child-like wonder, and the disappointment that arises when confronted with the real world. They were also pretty funny. I still think they are worth sharing, so rather than go back to a dead project and attempt to draw them I want to relate them here. It will be different of course, but hopefully still entertaining. Each of these blog entries will carry the Misspent Youth title.

I want to begin by retelling the first story I drew in prose form.

When I was in first grade in 1967 I wanted to be the Flash for Halloween. I’m pretty sure none of my teachers or most of my friends even knew who the Flash was. Fifty years later he’s on TV and kids everywhere are into the Scarlet Speedster. It makes me incredibly happy when I see posts of friend’s children dressed in the incredibly detailed costumes that are now available. 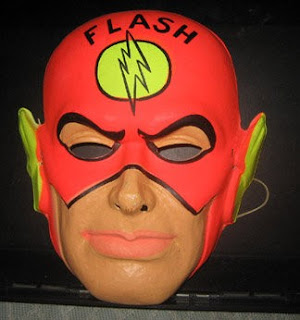 So Mom got out her sewing machine. We got red and yellow cloth ad began to cut and sew. I was pretty specific with what I wanted. In every Flash comic, and on the costume we bought, the yellow part of his costume streaked out behind him as he ran. I now know that these drawings were by Carmine Infantino. The yellow streaks were meant to represent Flash running at super speed. At the time, all I knew was that I wanted the yellow part of my costume to be made out of long, trailing strips of cloth. It would make me look like I was running really fast, you see.

So the day of the first grade Halloween party came. We held a parade down the only street in my small hometown. There I was, all drooping red and yellow cloth, not looking like I was moving very fast at all. To make matters worse they paired me up with some kid in a devil costume. I was supposed to be a superhero and they made me hold hands with the prince of Darkness.