Of Monkeys and Memories

A week ago I posted the following picture as a Throwback Thursday feature on Facebook. 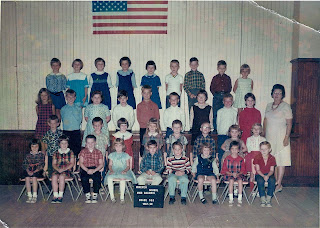 It’s a picture of my first grade class in 1967. Actually, it’s a picture of the first and second grade classes at Nineveh elementary. It was a small country school with three classrooms and a small auditorium, so each room housed two grades.

The picture spurred a lot of conversation. I’m friends with a couple of the people in this picture, but the truth is I haven’t seen or even thought of most of these kids in years and years. I couldn’t name a significant number of them and as you can see, not a big group of people.

But Facebook works some algorithmic magic. On the day I posted it one of the girls in the pic (Hi, Marijane!), who I haven’t seen since second grade or had any contact with somehow saw the picture and tagged herself. As soon as I heard her name I remembered it. Others began to comment and over the course of the day identified most of the faces in the picture. Names that I would never have consciously thought of again were apparently coded in a neuron somewhere.

Which brings me back to the topic of memory again, a recurring theme on this blog.

I have a pretty good memory. Better than a lot of people, I think. I remember the day that picture was taken pretty well, simply because of the somewhat traumatic event that proceeded it. Earlier that day, during recess, one of the other kids threw a rock and hit me in the back of the head. I cried and bled a lot. You can’t see it in the picture, but I don’t look real happy in that shot. My head hurt and there was probably still blood in my hair.

I mentioned this in the thread that followed my post. No one else remembered that, nor did I expect them to. It was an incident about me that, unless you were really traumatized by witnessing it, you would have no reason to remember.

And I know exactly which kid in this picture did it.

But then I mentioned a couple of other things that no one remembered either. I’m pretty sure everyone in that picture has their own version of this; memories that are clear to them that I wouldn’t recognize as part of my experience at all. But I do wonder... I’m known as a storyteller and a writer, which can be synonyms for being a liar. One of the memories I posted sounds completely absurd and made up. No one commented, maybe because of the sheer improbability of it. But I confirmed this memory with my Mom, so I’m not crazy.

We took care of a monkey in our house when I was six.

Two of the kids in the picture I couldn’t identify were a brother and sister with the unlikely last name of Mullet. Another friend recognized them and said in her post, ‟Remember, Wayne, when their house burned?” I do, which is what reminded me of the monkey.

I don’t remember all of the details, but Mom tells the story like this... On a Saturday morning in February she received a phone call from someone telling her that the Mullet's house was on fire. They were neighbors of ours. Now where I grew up in the country the word neighbor referred to anyone in a five mile radius, so it wasn’t like they were next door or even in sight of our house. They lived on a narrow dirt road maybe a mile from us. Mom went out to see if she could help and found the kids walking along the road, the older one pulling a wagon with his little brother and sister, and I think, a baby in it, walking away from their burning house.

There was also a cage with their pet monkey in it.

They didn’t have coats or anything with them. Mom took them into our house and fed them soup. Over the course of the next few days, with help from our church, Mom helped find them a place to live, and gathered food and clothing donations.

And we took care of the monkey until they were settled in their new home.

There was a cage they kept it in. For a few days this was in our living room. My primary memory of it was that it ate bananas, which I know is a cliché, but that’s probably why we gave them to him. I also remember him holding a stick of Juicy Fruit gum in his tiny paws and nibbling it.

This is not an actual video of that monkey, but you really need a visual here.

This is vivid to me. I realize how unlikely it may sound to anyone I knew back then. Why or how the Mullets had a pet monkey I’ll never know.

That’s pretty much it. I have no great insights about this. Just wanted to establish I’m not making this up.

When I was working on my memory blog last spring I spent some time thinking about first grade and wrote down a lot of stuff I remember from that time. I’m going to post them below, just for the sake of documentation. I realize this may be tedious for readers, so I understand if you want to bail now. None of this really means anything to anyone but me.

I’ve also posted a short comics story I did a few years ago that chronicles one of these memories. It’s at the very end.


On the first day of school I got on the bus okay, but then when I got there I wouldn’t go into the classroom. I sat on a chair in the hallway. Miss Baldwin (who had been one of my Mom’s teachers), kept trying to bribe me to come in. At lunchtime I went out for recess and sat on the front steps to eat. Mom stopped by. I think Miss Baldwin had probably called her. She led me to my seat for the afternoon. After that I was okay.

There was a substitute teacher one week who spent time playing the Mary Poppins soundtrack for us. I don’t remember watching the film, but whoever she was she was pretty obsessed with it. Possibly she just had no idea how to fill in and teach us at the time and this was a way of keeping us entertained.

One day it snowed a lot. Before recess I heard some of the older kids talking about building a snow fort. In my mind this was an elaborate construction of snow that would look like a real fort, like the Alamo or something. When I went outside and saw that it was just four big snowballs rolled together to hide behind during a snowball fight I was pretty disappointed. The real world not living up to my imagination has been an ongoing theme in my life.

Miss Baldwin paddled one girl (this was the memory I posted that no one else remembered). Thelma kind of lost her mind smacking her. The wooden paddle broke and a piece went flying up the aisle between the desks. Thelma kept right on hitting her.

I could read before I started school, so there were days when I was pretty bored by our lessons (this is a problem that followed me through my whole academic career). There was a bookshelf in the back of the room. One day while Miss Baldwin was teaching new words (I remember her holding flash cards up with words on them and her spelling them out so the other kids could learn them), I grabbed a book from the shelf and was reading it while she did her thing. She noticed I wasn’t paying attention, so she came back and snatched the book out of my hand and yelled at me. I remember confusion. I’m sure I couldn’t have articulated it then, but why was she shaming me for doing the very thing she was trying to teach everyone to do.

There’s a WWII Memorial stone outside the school with Dad and Uncle Carl’s name engraved on it.

One of my classmates cut figures out of his comic books, essentially making paper dolls out of them. I thought this was cool for a short time. I remember cutting up at least an issue of X-Men, something I still regret. Mom brings this up frequently when we’re talking about old comics. She seems to think I cut up my whole collection. I know I still have comics from that era, so that can’t be true. I don’t think it was more than one or two, but maybe.

Every day someone would walk to the store in Nineveh to pick up snacks and candy if we had money. I got pretty addicted to cheese popcorn.

I took some of my Marx action figures to school. During recess we were, for some reason, just throwing them up into the air and catching them. Another kid threw my Geronimo figure up and it landed on the roof. I don’t think he did it on purpose. I cried and so did he when he saw how upset I was. Even though there were ladders and we had a maintenance guy no one would climb up to get it down. I would see it up there every day. The next year I went to Rogersville for second grade. From the bus I could see Geronimo laying on the roof. Rained on, covered in snow and ice, always there. One day when we stopped at Nineveh to drop off the first graders and pick up the second graders that went to Rogersville the maintenance guy, the same one from the year before got on the bus and handed me Geronimo. Someone had thrown a baseball or a football up and it got stuck on the roof. That was worth their time getting out the ladder and climbing up. While they were there they might as well get my action figure as an afterthought.

Later that same day we were again throwing Geronimo up in the air at recess at Rogersville. This time he came down on a rock and sheared off half of one of his feet. Poor Geronimo. In between these two events I had bought (Mom had bought), a second Geronimo to replace the first one, so for years I had two, one crippled, one not. I still have the non-crippled one.

I had the lead in the play, Boots and His Brothers (this might have been 3rd grade… it was in the auditorium at Nineveh). 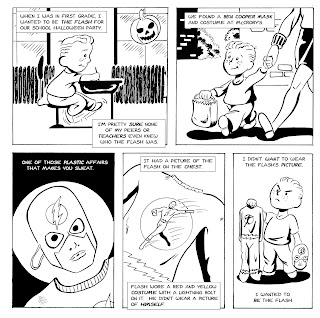 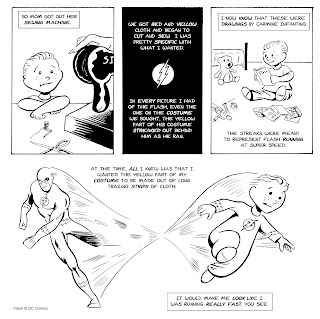 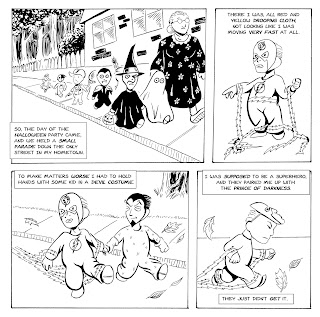