The first time I ever heard of or saw Adam Ant was on the televison program Solid Gold in 1981. I was hooked immediately. He performed the song Stand and Deliver, which is still one of my favorite Ant songs. The driving beat of the double drums, the overlapping lyrics and yodel-like howls; the sheer energy and fun of this song is hard to dismiss. But it was more than that.

I can't embed the video, but you can watch it here: http://youtu.be/s1uioCkdhzM

It was the clothes.

I'm pretty much on record in understanding that a lot of my musical tastes started with image. I've said here many times that what my list of favorite artists, Bowie, Alice Cooper, KISS, etc., all have in common is costumes and makeup. Adam fell into this category pretty easily. The tri-corner hat, the great cloak, the slash of warpaint... how could I not fall in love with this. KISS remined me of superheroes. Adam Ant reminded me of an old Disney series I had watched as a child called The Scarecrow of Romney Marsh, which featured masked heroes in Revolutionary times. This was a comic book come to life. 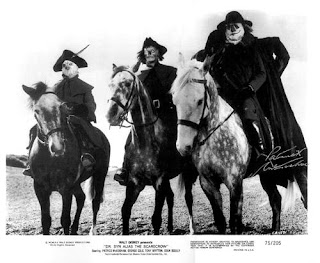 In the early 80s I was scrambling around looking for new music. KISS had taken off their makeup and I was feeling a little burned out with 70s Rock. The new batch of Rock bands like Motley Crue and Def Leppard just weren't doing it for me (I've come around since then). I flirted with some Punk, what little of it I had access to in my small county. I listened to a lot of the New Wave stuff. MTV was, of course, a pretty big factor in pointing me in the direction of a lot of this stuff.

But Adam clicked with me more than most. After the Solid Gold appearance I went out and bought Kings of the Wild Frontier and while I like the album a lot I was disappointed that Stand and Deliver wasn't on it. I did find the single eventually, but the song didn't appear on an album until the next one, Prince Charming. 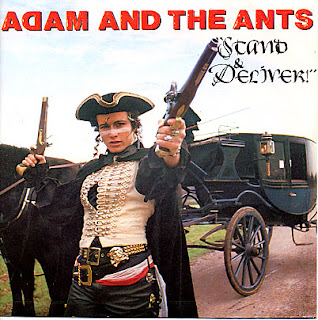 I became something of a completist with Adam. This was the first time I was exposed to the idea, more prevalent in Great Britain than here, of there being b-sides to singles that were not included on the albums. This launched a search for the singles as well as the albums, which is exactly the plan of the record labels. This has come back to bite me with several artists since then.

Adam was part of the early wave of British Punk Rock. He knew and hung out with the Sex Pistols and Siouxie and Billy Idol and lots of others who were on the scene at the time. He was originally managed by Malcolm McLaren, the same guy who once managed the New York Dolls and then went back to England to launch the Sex Pistols. The story goes that Adam couldn't take his shit and left to form his own band (McLaren teamed the original Ants with 13 year old Annabella Lwin to form Bow Wow Wow).

His first album, Dirk Wears White Sox, was not originally released in the States. It was the first import record I ever bought, on my 21st birthday.

I kind of obsessed. I bought singles. I bought picture discs. My friend Fred was into him as much as I was and he bought all this stuff as well. We made tapes of the b-sides so we could listen to them all together (the record label eventually did the same thing and released a compilation called B-Side Babies... We were so ahead of that curve).

Twice I dressed in Adam Ant costumes. The first was for a Halloween dance where my costume wasn't really Adam-like, but the streak of makeup and the ribbons in my hair were pretty obvious.

The second time was for a talent show. I was working as a counselor for the Upward Bound program at my college and spent a lot of time with the drama teacher. We were tasked with creating a talent show for the high school students in our program. There were improv skits and some music by a couple of genuinely talented people, and some comedy routines. I dragged out my love of the lip synch, just like with KISS and Cheap Trick (actually going back to a 7th grade performance as Alice Cooper doing School's Out on the last day of school, now that I think of it. I talked a couple of other people into joining me and we “performed” Strip, Goody Two Shoes, and Stand and Deliver.

I saw Adam twice at the Stanley Theatre in Pittsburgh, both times from the balcony. The opening bands were The Romantics, and Patty Smythe and Scandal. I remember enjoying the shows, but being a little disappointed with Adam's voice. His energy level and performance were great, but his voice sounded weaker than on the records.

That wasn't true this past Friday at Stage AE. I was about three people back from the stage this time and he sounded incredible. He's older now, but his energy and performance and charisma are intact. The setlist dug pretty deeply into his catalog and featured lots of those b-sides I tried so hard to track down, as well as a good chunk of stuff from the Dirk album. Everybody was singing along to Goody Two Shoes. I was pretty much on my own singing along with Never Trust a Man (With Egg on his Face).

As my friend Bonnie (who snagged the setlist for me), pointed out, I was quite the fangirl that night.


This was probably the only concert I've been to in my life where the women outnumbered the men. I noticed this first when we were going into the venue. We were broken into two lines for the pat-down, men and women. My friend Bud and I went through the men's line quickly, because there wasn't really a line. Kate and Bonnie, who we had been standing with outside the venue didn't make it in to join us for another 10-15 minutes. I shouldn't really be surprised. Adam had a larger female fan base than a lot of artists at the time. Though he came out of the Punk world he quickly embraced his success and became a Pop idol. By the time of his album Strip it was pretty obvious he was courting a younger audience, including female fans. As a fan I remember being aware of this. The tour book that I purchased at the Strip show was full of cheesecake (beefcake?) photos of Adam. I never apologized for the stuff I loved, but I was hard-pressed explaining this fetish to my harder-rocking friends.


The crowd loved him. I think part of the reaction is just that we never expected to ever see Adam perform again. Once more, for the third time in a week, I was struck at how music united everyone there. Here was a musician and a bunch of songs that I had claimed as my own a long time ago. Other than a single friend, this wasn't a fandom I shared with a lot of people. These songs were part of my soundtrack. They are tied into very specific pieces of my life. I know I couldn't have been completely alone in this. Adam Ant or Cheap Trick would not have had careers if I was the only one who listened to them. Cherie Currie couldn't find an audience today if The Runaways hadn't made an impact.


When we find that thing that moves us we make it our own, unknowingly sharing it with uncountable others. The memories and associations we have with this music are personally specific, but the song remains the same.
Posted by Wayne at 6:19 AM