Of all of the comics from my past that I love, the one I have the toughest time convincing anyone to read is Tales of the Beanworld by Larry Marder. I get it. I really do. I was just as dismissive of it when I first saw the images and ads in other comics I was reading. Even when Scott McCloud, in the letters pages of Zot! recommended it highly, I still ignored it (and if you read my last post you'll know that I should have learned that lesson with Zot! itself). On the surface this weird little comic looks like nothing more than stick figures. On closer examination, not only do they seem to be stick figures, but the whole thing just seems... weird. Silly. Stupid even. Marder's tagline for the series acknowledges this. He referred to Beanworld as “A most peculiar comic book experience.” 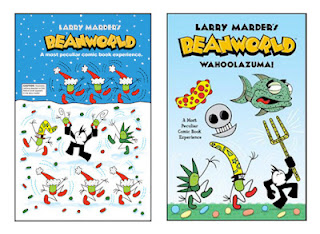 That pretty much sums it up.

But it's wonderful. It's not for everyone, I'll give you that. But if you give it a chance, look past what you believe to be limited art and a silly premise, it is filled with grand ideas, wonder, and a tremendous amount of fun. I ignored and dismissed it for it's entire original run (21 issues from Eclipse Comics, from 1985 until 1993). I read good reviews of it in a variety of sources, but I just couldn't get past my prejudice about what I thought the series was.

In 1993 Fred and I went to a convention in Philadelphia to promote Grey Legacy (I've recounted my meeting with Scott McCloud at this convention elsewhere on this blog). Larry Marder was set up right next to McCloud in Artist's Alley, selling copies of the first trade paperback collection of Tales of the Beanworld. He was incredibly nice and said very positive things about our comic. He gave me a Beanworld action figure, a dry Lima bean with a face drawn on it. Before the weekend was over I decided to try and get over my prejudice and give his book a chance. I bought the TP from him, got it signed, then went back to our motel room and read it. I've been a convert ever since.

So, you ask, what is Beanworld about? That's really difficult to describe. It is a most peculiar comic book experience, after all. It's about ecology and living in harmony with the world. It's about mythology and symbolism. It's about the world, and finding your place in it. It's about art and music and the need to balance personal identity with living in a society. All told with “stick figures” in what Larry Marder refers to as “two and a half dimensions.” He talks about this and the influence of French Surrealist painter Marcel Duchamp on his creation of Beanworld. Really! You can read it at his blog. 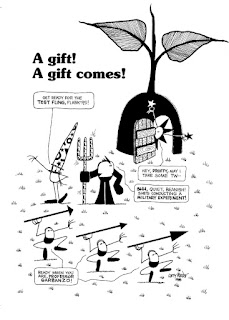 I can't really talk about the plot or ecology of the Beanworld without sounding really convoluted and confusing. Many of the details of how everything in this world fits together are revealed over the course of the story. Most of the Beans who inhabit this world appear to be undifferentiated in appearance, yet each works to serve a function in their society. 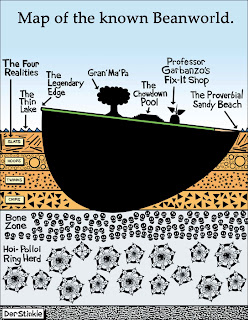 There are a few very specific characters who serve specialized roles. It seems that when the need arises for something new in the system, a new point of view, or skill necessary for the Bean's survival, the world provides. When the series premieres there are only five Beans with idiosyncratic personalities separate from the others (and three of them are inextricably linked, so that really there are only three real individual voices).

Mr. Spook is the Hero, and in many ways represents the classic Warrior archetype. The Beans rely on what is essentially a hunter/gatherer method of survival (though like everything else in this series, that is an oversimplification). Mr. Spook carries a three pronged fork, a magic weapon that helps achieve their goals. He leads the troops on their hunting/gathering expeditions. He is a straight-line thinker with very little imagination, but his dedication to their survival comes before any personal gain or glory. The very concepts are foreign to the Beans.

Professor Garbanzo is the intellectual of the group and fulfills the archetypal role of the Magician. She wears the classic Magician's pointy hat, covered in arcane symbols. In this case, the symbols represent the actual building blocks of their reality, and it is the Professor's job to understand how these work to create new inventions from them that will benefit society. There are only four elements in the Beanworld, and everything that is not organic is built from them. I want to point out that Garbanzo is referred to as “she” throughout the narrative. There are no noticeable differences or secondary sexual characteristics between the sexes of the Beans, nor, as we learn later in the series, do they reproduce in a sexual way. Sex only exists as a personal pronoun in this world. I find it interesting that Marder chose to specify female characters since the difference in the sexes seems to have no bearing on the roles they play in society. Equality isn't an issue. It simply is.

Then there are the three unnamed Beans who collectively form the Boom'R Band, a group of musicians. Their only job in the collective is to create music. I think it's wonderful that in a world where everything develops specifically to serve the needs of the community, that once food and safety is being taken care of, music is the next thing that appears. The Boom'R's earn their keep through their music, and there is never a question of it's necessity. 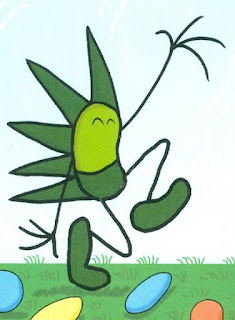 Which leads us to Beanish. If there is a central character in Beanworld (and that's debatable), it is Beanish. One of the earliest story’s is called “Beanish Breaks Out.” Breaking out is the term the Beans use to describe when one of them goes from being an undifferentiated member to the community to finding a specific identity and role in their society. It is assumed that at some point Mr. Spook, Professor Garbanzo, and the Boom'R's all broke out as well.

Beanish breaks out and becomes an artist. He begins to create pictures from the four basic elements, creating the “Fabulous Look-See Show” for the other Beans to enjoy (and in a stroke of genius, it is only Mr. Spook, the practical straight-line thinker, who just doesn't get Art. He never questions Beanish's right to create or earn his keep in this fashion, but like many people who encounter Beanworld for the first time, he just doesn't get it). I think "Fabulous Look-See Show" is a great way to describe comics, by the way.

Beanish's story of personal growth becomes a focal point for the series, the storyline that the reader can most identify with. It is the struggle any creative person goes through. He has issues with his materials and discovering how to use them. He questions the value of what he does. He engages in a personal relationship with his muse, in this case a physical manifestation that goes by the name of Dreamishness. Only Beanish knows about her, and he cannot talk about her with anyone else. The metaphor of this will ring true to any of us who have had dealings with our own personal muse. The core lesson Beanish learns, in terms of what he needs to give to his muse, and what he receives from her, is wonderfully expressed in a world where symbols have a physical reality. It is both beautiful and true.

The entire original series is available in two hardcover editions published by Dark Horse Comics. A couple of years ago, after a long hiatus, Marder began creating new tales of the Beanworld. A third volume of new material was released. A new collection, Volume 3.5, according to the solicitation, is due in June, 2012.

Beanworld is a challenge. It is not like anything else you have ever read. A lot of the language used in the dialog is created by Marder, and much of it can sound unfamiliar and weird, but, like the dialects and language in the comic strip Pogo or the novel A Clockwork Orange (and you've probably never seen those two things referenced together before), once you get into it there is a poetry and rhythm. But, if you are interested in comics as a storytelling medium, this is one of the best examples of how far the format can be pushed. Try to move beyond the Mr. Spook way of looking at it and try to see the deeper stories and concepts the symbols are referring to. Be like Beanish and break out of your habitual ways of seeing.

Beanworld and all of its characters are copyright Larry Marder.
Posted by Wayne at 12:10 PM