Last Monday on my lunch break around 1 PM , based on the recommendation of a number of friends, I picked up a copy of the book Ready Player One by Ernest Cline from the Carnegie Library. I finished it around 11:30 that same evening. It was a quick read partly due to the writing style, but primarily because of the subject matter. For those who haven't heard of it, the following is the book description, lifted directly from the Amazon page.

Like most of humanity, Wade Watts escapes his grim surroundings by spending his waking hours jacked into the OASIS, a sprawling virtual utopia that lets you be anything you want to be, a place where you can live and play and fall in love on any of ten thousand planets.”

It's a love letter to Geek Culture, very specifically Geek Culture of the 1980's. Not that it can't be enjoyed by someone younger. The setting is a World of Warcraft-like MMO, so anyone who plays modern video games can relate as well. But, for anyone who grew up at that time, listening to that music, watching those movies, and most importantly, standing in arcades playing coin-op video games, this book is a treasure trove of fun nostalgia and cultural touchstones.

I lost count of the obscure references that brought back memories for me. To solve the mystery/puzzle of the game world the characters need encyclopedic knowledge of a variety of Pop Culture topics. When a clue from the movie Bladerunner played a part I flashed back to the summer of 1982 when, working as an intern at the state capitol in Harrisburg, Pennsylvania, my friend and mentor Doc Falhaber and I came out of a dark theater feeling drenched and claustrophobic. Thirty years later the oppressive atmosphere of a neon-lit corporate oligarchy has become real life (which, in the reality of the novel, is part of what has led to the state of the world in 2044).

A significant puzzle is solved by knowledge of the lyrics of 2112, the magnum opus from the 1976 album of the same name by the rock band Rush. But not just the lyrics. The original album liner notes included written narration between the various segments of the song. These were not a part of the song and only existed in print. I hadn't thought of that in years but I immediately flashed back to sitting next to my record player, giant headphones clamped over my ears, and reading along with the gatefold album sleeve spread across my lap.

But it was the video games that brought back the most. Though I've played a few, I'm not really a video gamer now (partly because I know how hooked I can get and I simply don't have time in my life... it's a conscious decision on my part to avoid an addiction). But I used to be. I pumped way too many quarters into video games in the 80's. I played them all. I spent hours in game rooms at various malls. There was a Defender machine at Balsalmo's Pizza in Waynesburg, and I got really good at it. A few years later the same game at a pizza shop in Edinboro had a ridiculously low threshold score for winning extra lives. I once walked away from it with over 40 lives left. I simply couldn't play any more.

At that same time Fred and I would make a weekly trip into Erie to get comics. There was a game at the Millcreek Mall called Ry-Gar that we were stupidly obsessed with. 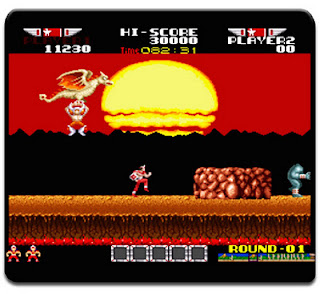 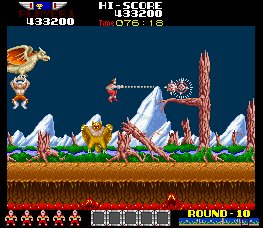 In the book there is a passing mention of a game called Gorf. I actually laughed out loud at the reference, simply because that game is so tied into something that has become a giant part of my life that I had simply forgotten the original video game. 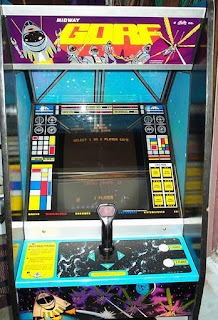 If you go back several posts in this blog you'll read about the origins of the comic Fred and I created, Grey Legacy. The first appearance of the character Shadowlock was in a series of short, comedy novellas we wrote. It was in the fourth book of the series, the only one I wrote the bulk of. The title was Alpha Atari, and a lot of the story was based on our shared obsession with video games at the time. While reading Ready Player One I couldn't help but think of our story. A universe that was based on these video games is something we had written close to thirty years ago. Don't get me wrong... I'm not saying we were ripped off, or that our efforts back then were in any way comparable to what Cline accomplished in this book. We weren't the only ones influenced by this in the 80's. DC Comics released an officially licensed series called Atari Force (with beautiful art by Jose Garcia-Lopez). I was vastly amused at the surface similarities though. Anyway, in our story our heroes, all based on ourselves and our friends of course, travelled to the planet Gorf and had wacky adventures there.

A few years later, when Shadowlock became an actual ongoing concern for us in comic book form, as an inside joke we named his home planet Gorph. That name survived when we changed the title of the book to Grey Legacy and changed our entire approach. On the very first page of the comic the character Lesterfarr begins school at Gorphtek University. 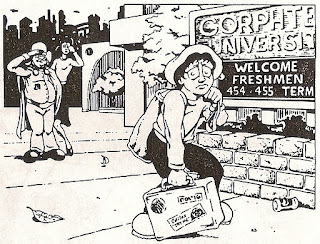 I reference it in the Brix comic and comic strips I did in the last couple of years. Gorph has become such a common setting in the universe Fred and I created for our comics that I had not thought of the actual origin of the name for many years.

One note of complaint about Ready Player One, and this comes very specifically from my comic book back ground.

In the novel there is a reference to an 80's era video game called Swordquest. The premise of the novel is that there is a puzzle hidden within the game world and the first person to solve it wins untold riches. Swordquest was an actual game with the same premise. The first person to solve the riddle of the video game would win a prize, the "Talisman of Penultimate Truth." This was an actual prize, created out of gold and jewels and valued at around $25,000 at the time. It was won by a guy from Detroit named Steven Bell. I played Swordquest once or twice. My friend David Ealy owned the game and I spent a couple of days at his house, playing the game and poring over the clues, many of which were contained in a comic book that came with the game.

And here's where my problem with the book comes in. The premise of the entire novel is that knowledge of obscure Geek Culture references were essential to winning the game, and there are countless examples of references to game designers and movie stars, but when the Swordquest comic is mentioned there is no mention its creators. The comics were written by Roy Thomas and Gerry Conway, and drawn and inked by George Pérez and Dick Giordano. These are all legendary names in the history of comics, and in a book that celebrates Geek Culture, the comic book guys still got ignored. It's a really minor gripe based on my own interests, and I really recommend the book, but would it have killed the author to give credit where credit is due in the world of comics, just like he did with every other topic in the book?

Anyway, go read it. It's a lot of fun. One of the most purely entertaining reads I've had this year.

For the Kindle Edition