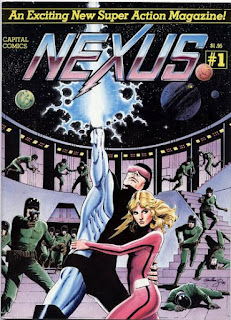 To be honest I really don't remember a lot of the details of the plot of Nexus. Written by Mike Baron and drawn (mostly) by Steve Rude, it was one of the earliest of the Direct Market books, originally published by Capitol in black and white and then quickly moving to First Publications and full color. I tapped into Nexus early, with the black and white issues (picked up at Eide's on one of my earliest ventures into the city to find a comics shop, if memory serves).

To summarize; Horatio Hellpop, also known as Nexus, has terrible dreams about mass murderers, dreams that he is compelled to act upon. Wielding tremendous “fusion casting” powers Nexus tracks these genocidal villains across the universe and kills them. He is essentially an assassin, and though his victims are all guilty of horrendous crimes (sort of like Dexter with superpowers), the tragedy of Nexus is that with each victim he takes a step closer to being a mass murderer himself.

I still think of it as one of my favorite books from that time, but recently, in preparation for writing this post, I flipped through a lot of the early issues and the rest of the run and was surprised at how little of it looked familiar. The characters were all well-known to me and as I browsed most of their primary relationships came back. But the stories, the specifics of the ongoing plot remained vague.

While the basic idea of Nexus killing killers provides a structure for the stories, that's not really what the book was about. It was a story about relationships, religion, politics, and societal pressures. It was about free will and moral ambiguity. Though the basic premise of the series was dark, the book was also a tremendous amount of fun. In this way, unlike so many comics that focus on dark themes, Nexus embraced the whole spectrum of life. The joy and love and friendship and laughter that suffused every issue showed the human spirit and reminded us of what we stood to lose when evil prevails.

Nexus himself could be a bit of a downer. He did carry a terrible burden after all, and feared allowing himself to genuinely care. Over the course of the series the amazing supporting cast humanized him, bringing out of his self-imposed emotional exile to join life more fully. Sundra Peale was the love interest, but she was so much more than that. Sundra had a rich life outside of her relationship with Horatio, and of the two was the more self aware. She was independent and confident and self-reliant. Horatio's best friend Dave was centered and calm. Dave's son Fred, who went by the warrior name of Judah Maccabee, was loud, brash and hedonistic. There were many, many more. Baron's skill at presenting richly imagined and thoroughly complex characters cannot be overstated.

And then there's the art. I'm just going to say that Steve Rude ranks among my all time favorite artists. His influences are diverse; comics artists Jack Kirby, Alex Toth and Russ Manning are the most obvious, but artists such as Andrew Loomis and Norman Rockwell are also evident. But Rude takes these influences and makes them his own. When I first saw Nexus I didn't really put any of this together. The sheer power of his graphic design was enough. 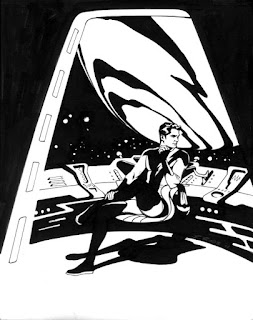 I love the clean lines. His ability to convey emotion through body language and facial expressions is unparallelled. There is a lithe sense of motion in every action, even when characters are at rest. His use of solid black is fearless. Solid black foregrounds are butted directly against solid black midgrounds and backgrounds, and due to his composition it never flattens out.


Rude's art has always been something I have aspired to. I think he was a more direct influence on my collaborator Fred, at least in terms of visual world-building, than on me. Nexus subtly influenced our development of the world of Grey Legacy. We were telling a very different type of story, but the pieces are there. The mix of the serious with the absurd certainly was there (though Douglas Adams was responsible for that aesthetic for us as well). Some of our alien species are, well... cartoony. This was a conscious decision on our part. I remember, during one of our early convention appearances someone looking at our art and really taking us to task for this. He just couldn't wrap his head around our more “realistic” looking characters existing in the same world as Lesterfarr and Bilmar. The contrast really bothered him, but it was exactly the look we wanted. 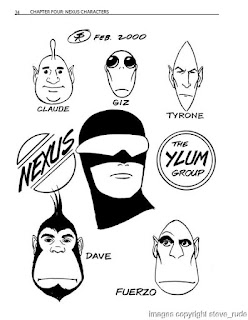 At least some of that came from Rude. The various alien inhabitants of Ylum (Nexus' world, pronounced Eye-Lum) were a mix of the very real and the slightly absurd. The drawings of Dr. Seuss were a huge influence on Rude's designs. It wasn't just background characters either, but many of the central cast. Dave, Judah, Mezz, Tyrone... all of these had an air of whimsy in their design. But that whimsy never undermined the seriousness of their characterization.

I'm pretty sure I haven't done justice to this. Nexus is a series I would love to turn more people onto, but these days it's really difficult to do so. The books are simply not readily available for new readers. The whole series is being collected into beautiful hardcover editions, but at fifty bucks a pop they are only for people who are already fans of the series. A trade paperback edition of the first few issues has been released, but the color issues were reproduced in black and white, and the strength of Rude's design was marred by the addition of unnecessary gray tones. Dark Horse Comics has released the last few Nexus stories over the years, including a brand new one scheduled to appear in Dark Horse Presents soon. Dark Horse has been releasing great color omnibus editions of many of the great books of the 80's at reasonable prices. Come on, let's see a Nexus Omnibus. Unless the rights are tied up elsewhere I can't see any reason not to. I would sell the Hell out of that at Phantom of the Attic.