Marvel Comics responded to the explosion of the Direct Market by launching a creator-owned line of comics under the Epic Comics imprint. The first book they published was Dreadstar by Jim Starlin. An introductory chapter to this, entitled Metamorphosis Odyssey, had already been serialized in Epic Illustrated, the Heavy Metal-like magazine Marvel had been publishing. I had read these, but quite honestly, Dreadstar just never really clicked for me (though I read quite a few issues before I realized this). 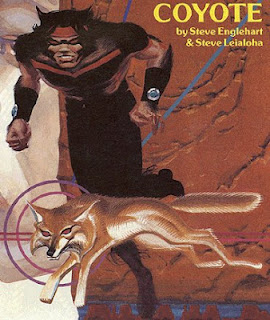 Their second book, Coyote by Steve Englehart, really grabbed me.

Englehart was an established comics writer by this time, having written many books for both Marvel and DC. His run on Captain America featured the Secret Empire storyline wherein Cap became so disillusioned with American politics that he briefly gave up his identity to become Nomad, the Man Without a Country. This was after witnessing the suicide of the villainous leader of the Secret Empire. While never made explicit, it was strongly implied that this man was Richard Nixon, president of the United States. This story appeared during the height of the Watergate scandal, and the issue with the suicide appeared about a month before the real Nixon resigned. Englehart went on to collaborate with artist Marshall Rogers on Batman, creating a seminal run that is still influential (collected in the Batman: Strange Apparitions TP). He left comics to write a The Point Man, a well-received fantasy/occult novel.

In various interviews I have read from that time Englehart had no plans to ever work in comics again, due to ongoing issues with creators rights. He did create the character of Coyote with Rogers for Eclipse Publishing, a Direct Market company that offered full ownership of properties to the creators. 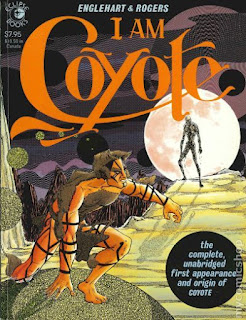 Coyote was serialized in black and white in Eclipse Magazine, later collected in color as a trade paperback called I am Coyote, which is how I first saw this story. Roger's art Coyote was dark and creepy, layered with zip-a-tone gray tones (http://en.wikipedia.org/wiki/Screentone... for you youngins who don't know what that is). In B&W it looked great, but reproduced pretty muddy when color was added. 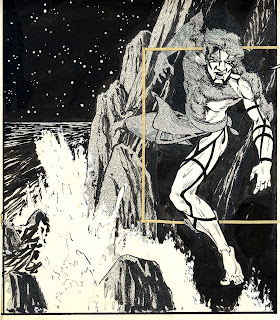 Unfortunately, the art didn't really capture the spirit of what Englehart wanted Coyote to be. He was tired of the Batman-like dark avengers of comics, living in alleys and creeping around gothic rooftops. Coyote was a creature of the desert southwest, set in Las Vegas. Bright sun, bright neon and wide open spaces.

When Englehart was asked to contribute a new comic to Epic, where he would own his characters and stories, Coyote was the concept he chose. Rogers was not available at the time (and installments of the original series had run increasingly late).

Artist Steve Leialoha came on board with a much lighter style, more iconic in approach. Coyote himself seemed lighter, in mood as well as physical mass.


Coyote was the modern incarnation of a god-concept. Sylvester "Sly" Santagelo was lost in the desert as a baby, found and raised by the Native American trickster god, Coyote. He was raised with totem animals and spirits in a world filled with magic. He entered the real world as a young man, seeing it for the first time. In spite of his upbringing he was enthralled by our mundane world, seeing the magic in it that most of don't. He was youthfully arrogant, filled with a sense of his own power (“Coyote is so sly,” he often said of himself), even when he screwed up. He was happy-go-lucky, filled with a sense of wonder. He believed anything was possible and that he had the power to make happen whatever he wanted. He was overtly sexual. His ongoing affair with NaTalia and Cassie was one of the first openly polyamorous, and interracial relationships in comics.

Is it any wonder he appealed to twenty-one year old Wayne? 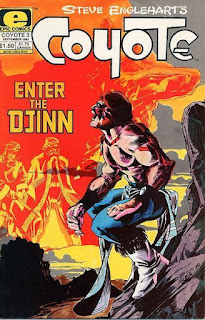 Leialoha left after only two beautiful issues. Issue three was drawn by Butch Guice. His Coyote was bulky and muscular, looking much more like the standard superhero comic than what we had seen before, and the style really didn't work. 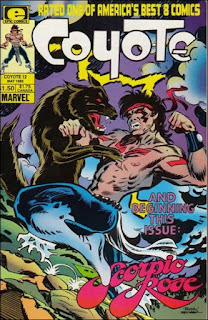 The rest of the series was drawn by Chas Truog, who went on to be the artist for Grant Morrison's awesome Animal Man series (which featured a story called Coyote Gospel). As much as I love Coyote, and as much as I love Animal Man, I'm not a fan of Truog's art. I find it serviceable, but fairly bland. 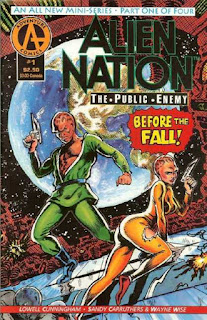 As an aside, Truog did a couple of covers for the Alien Nation: The Public Enemy mini-series I inked back in the day.

Coyote ran for sixteen issues, and in terms of plot it was, quite honestly, a clusterfuck. Englehart seemed to just be throwing whatever he could think of into the mix and seeing how his character reacted to it. There were evil scientists and magical threats and aliens from Venus, all working together as part of an international cabal known as the Shadow Cabinet. There was a middle eastern hero known as the Djinn, Israeli spy organizations and cyborg Soviet assassins. There was a man who had half his brain living in another dimension. It was gloriously weird and reckless fun and I loved it.

I have no idea if it was any good or not.

Like too many series, it ended with no real resolution. I like to think Sly Santagelo is still wandering around Vegas and the surrounding desert, getting into trouble and getting laid and not taking any of it very seriously.

Reading this series served to turn me onto Native American mythology. I found a book called The Trickster by Paul Radin that changed the way I looked at the world and mythology. There was a great book called A Magic Dwells (from a quote by Hermann Hesse), that detailed the Navajo emergence myth. Coyote led me to read a lot about the concept of the Holy Fool and the Puer Aeternis, which tied well into the Percival Grail stories I was discovering at the time. These kinds of connections happened more and more often with the things I read and the stuff I was interested in, one leading fairly seamlessly into another. That's still true.

I'm not as naïve as I was then, nor quite so youthfully arrogant. I still see our mundane world through eyes of magic (at least I try to). Sometimes I'm pretty sure at least half my brain lives in another dimension. I fully believe the world is gloriously weird and fun. I try to convey those ideas in whatever I do. Talking about Comics is a great way of tricking people into learning about something else.