In a recent conversation with Dad (he’s 102 years old), I discovered more of his history with local music back when he was young. The conversation went something like this:

Me: I was reading a book about old Country music. It’s one based on the Burns documentary. It was talking about Grandpa Jones getting his start in Wheeling on WWVA. Did you ever see him?”

I grew up watching Hee Haw and seeing Grandpa Jones every week. If Dad ever mentioned that he knew him it escaped my notice.

My dad played guitar and mandolin in a family band. His mother played piano and accordion, but it was her brother Clark and his sons who were the musicians. Uncle Clark, who a I remember only slightly, was a barber in the small village of Time. He played the fiddle, and his boys and my dad rounded out his ‟Back Porch Band.” Dad couldn’t remember if that was their official name, or if it was simply the Phillips Family band. He thinks they played under both names at one time or another. Dad says he mostly just chorded along, and did some singing. His cousin Ray was apparently one of those classic back woods prodigies who could play anything with strings. They played frequently at local community get togethers and fairs, participating in contests. Dad mentioned playing frequently at Golden Oaks Park near Rogersville, PA (the site of this park is near my high school and is currently where the garage for their buses is). Sometimes they got paid (Dad remembers making at least a dollar once in awhile), and sometimes they didn’t. Sometimes these affairs were contests and the Phillips Family Band was good enough that twice they won the opportunity to play on the stage at the Wheeling Jamboree. This would have been in the late 1930s and early ‛40s. He played some after he returned from the War, but not as frequently.

This circuit of small community venues was frequented by a lot of the country music stars who were getting airplay on WWVA at the time, including, apparently, Grandpa Jones. Dad says they were never great friends, but they were certainly friendly when they ran into each other. Given the rules of Kevin Bacon, this make me three steps removed from everyone in the country music business.

Another country star of the time, who was never as famous as Jones, was Big Slim the Lone Cowboy, and Dad was genuinely friends with him. Slim had a radio show on WWVA and played on KDKA in Pittsburgh. He did live shows all over the area, including a lot of the small community events my Dad played at. Slim had a band, and in his live outdoor shows he would bring a horse. He did rope tricks and Dad saw him, many times, flick a cigarette out of his wife’s mouth with bullwhip (Slim a had number of wives, and did this trick with at least two of them. Dad knew his third wife. More on that later). 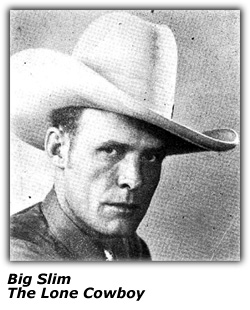 You can read more about Big Slim HERE. One of the things that struck me in this article is the mention of how Slim’s actual history is a bit of mystery because over the course of his career he told various stories about where he was from and what his life entailed. This struck me as funny because one of the things Dad said to me was, ‟I liked Slim, but you couldn’t believe a word out of his mouth.”

Slim was also a coon hunter and dog trainer, both of which were things my dad did as well, which extended the scope of their friendship. In addition to hunting, Dad also participated in Field Trials, a national dog racing competition. This is not the greyhounds running around a track you’re probably picturing, but a far more feral outdoor in the middle of nowhere activity my dad was part of well into his 70s (which deserves a much larger explanation and a blog of its own).

At some point, Dad sold Slim a coon hound for $125.00, a lot of money at that time (according to the US Inflation Calculator I just used, thats $1,458.24 in 2022 dollars). These were the days when the dogs were used for both the races and for hunting, before the two activities became more specialized. He saw Slim later and asked him how the the dog was doing for hunting. Slim told him at first he thought the dog was worthless. He was out hunting and the dog was barking on the trail, and kept circling around back to him. ‟I thought he was chasing deer,” Slim said. ‟I figured the next time he circled around I was just going to shoot him and get it over with.” Suddenly the dog started treeing deep in the woods. According to Slim, when he found the dog he was barking up a pine tree. When Slim shined his light into the tree there were seventeen coon in it staring back at him. He shot sixteen of them, but the last one got away. Best dog he ever had. He said he wouldn’t take $1000.00 dollars for him now.

Can’t believe a word he says.

The other story was a trip to the Kenton Nationals, or Leafy Oak as it was called back then. This was the biggest field trial in the country, near Kenton Ohio. Dad and Mom, their friends Ken and Elsie Shepherd, and Big Slim and his third wife, all stayed at the same motel. At first, when telling the story, he couldn’t remember Slim’s wife’s name. A few days later, on the phone, he says to me, ‟I think Slim’s wife was named Bebe.” Sure enough, her name was Bebe Bernard, the ‟Annie Oakley of West Virginia,” as she was billed in his act. ‟She was a whole lot younger than Slim,” Dad told me. 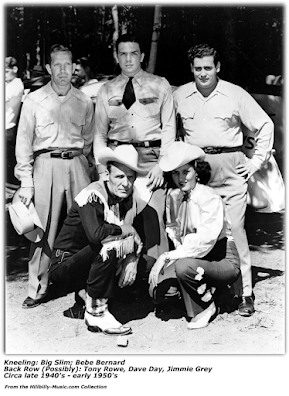 Anyway, they all got up early in the morning and Dad, Ken, and Slim piled into Dad’s car while the women all rode together in Ken’s. They went to to the race and spent the day. Apparently Bebe got completely shitface drunk over the course of the day. Passed out on the way home in the car with my Mom and Elsie. Slim carried her into the motel room and put her in the shower in her clothes to sober her up.

The article linked to above said that Slim took a number of young and upcoming country stars under his wing. One of them was Hawkshaw Hawkins, who died in the same plane crash as Patsy Cline. Not to spread unsubstantiated rumors seventy years later, but Dad says everyone at the time believed Slim was Hawkins real father. I know of no actual confirmation of this.

I’m 60, and still discovering fascinating things about my parent’s lives. Part of me is stunned that Dad never mentioned knowing Grandpa Jones, or if he did, me not remembering it. But then, by the time I was old enough for this to register it would have been forty years in the past for my Dad.

You can hear some of Slim’s music on YouTube. Here’s one of them.