Nick Marino is a Pittsburgh-based creator involved in a wide variety of comics related endeavors. He is a writer, an artist, and a podcaster, among many other things. Nick stays very active in the small press scene in Pittsburgh, working with an assortment of other artists. He's up for this installment of my small press interviews. You can see samples of Nick's work at the end of the interview.

1) Tell us a bit about your comics and where they are available.

Stick Cats is webcomic about stick figure cats that's just been bumped up to a Monday-Wednesday-Friday schedule. http://stickcats.nickmarino.net/

And those are just my current webcomics... you can check out more about my past, future, and side projects (as well as my print comics) at NickMarino.net. http://www.nickmarino.net/

3) Who have been your biggest influences, both in writing and in art?

Friends go first because they're the most important! They include Shawn Atkins, Ross Campbell, Dan Greenwald, Justique Woolridge, Nate McDonough, and lots of other local Pittsburgh comics creators.

4) What are your favorite comics (whether you consider them influential on your style or not)?

I love all comics!

Okay, not really. But I do appreciate all kinds of comics, even if I don't love every single story. My favorite works inspire deep thought, push my imagination to new limits, and tug at my heartstrings.

Just kidding! Although I do appreciate the more ambitious Garfield strips, here are a few of my favorite comics: We3, The Thanos Quest, R. Crumb's "Joe Blow," and Ral Grad.

5) Have you studied art or writing in college, or are you self-taught?

I never studied creative writing in a classroom, though I've done extensive independent research on character and story structure. However, I did take screenwriting classes in college. I enjoyed those because they were technical -- they focused on formatting and pacing.

As for art, I studied drawing off and on for years. I learned enough to know the basic elements of anatomy and composition, despite the fact that I like to ignore most of that when I sit down to draw.

In general, I've had a hard time learning creative skills in the classroom. I've studied graphic design, animation, filmmaking, cartooning, and illustration throughout the years, and I've found the school setting to be very discouraging.

But I love learning through trial and error! (Mostly error...)

6) What’s your normal process for creating your comic?

I have no one process for creating comics. Each one of my comics has a different creation process, and even those evolve over time.

I tend to be very collaborative, so I'm often consulting other writers and artists from the beginning. I also do most of my writing and art digitally, especially for Super Haters. In particular, I like to write in Google Docs because it affords me the ability to work from anywhere with an Internet connection.

I tend to draw on paper and scan it in. Then I tweak the lines on the computer. I normally draw in ink and skip the penciling stage. I've never liked pencils. They're too smudgy and gray. Yuck! Most of the time, I letter and color digitally. I've never enjoyed doing either of those on paper.

But I'm generalizing. There's no single process that I use over and over again. For example, Stick Cats was created as a reaction to my reliance on digital methods. So I write that one as I draw it and I do everything by hand on paper.

As for comics that I only write and don't draw, my story proicess goes something like this: I identify my beginning and end first. Sometimes I'll outline, sometime I won't. I do A LOT of research when I write. I enjoy that part.

I typically write the first draft of my story in loose prose. Then I edit things and tighten up the pacing as I convert the story into script format. From there, I'll edit another couple of times before I give an artist my finished script.

7) How do you promote your work?

Relentlessly! Mostly through the Internet. I link to my comics from every social media imaginable. I also podcast about my comics work, and interact on message boards and blogs about other comics.

In person, I do conventions. I drop my books off in stores when I have a new title, or if I'm in a new city. In Pittsburgh, I stay extremely active in the local comics scene, working to promote my comics by simply being everywhere that I possibly can!

8) What do you enjoy most about being a comics creator?

I love telling stories, and I love the way that comics carry my stories. More than anything else, I delight in the finished product. I enjoy promotion, although it's daunting. And I love creating!!! It's so hard to pick just a few things that I enjoy because I enjoy so much about creating comics.

9) What do you find most difficult about being a comics creator?

The printing process. It's frustrating, time consuming, and expensive.

Also, I sort of hate drawing. But not nearly as much as I hate printing!!!

10) What's more important to you: Telling a story or pushing the bounds of comic book art?

Storytelling. If I push the boundaries in the process, then that's an added bonus.

11) Why self publish instead of submitting your work to the majors?

Most of my work is "not ready for prime time" either in its themes, content, or quality. However, I'm still pretty new at self-publishing -- I just printed my first minicomic in 2008.

I have plenty of plans for submitting my work to publishing houses. I'm not sure that I'll be going to the "majors" (at least, not off the bat), but I'll definitely be approaching smaller publishing companies within the next few months.

12) What are your long-term goals with comics?

Creatively, my goal is to tell stories that resonate with readers and excite them to pick up more of my work. Professionally, my goal is to forge a sustainable, lucrative career by publishing a large body of work that meets my creative goal.

13) You are pretty heavily involved in the world of podcasting, about comics as well as other topics. What can you tell me about that? What got you interested in that in the first place?

I love working with audio, and I have long history of recording and editing. In the early 00s, my friend and I tried to start an "audio magazine," but it never really got off the ground.

Years later, I discovered comic book podcasts. Inspired by what I heard and aching to put my stamp on the medium, I contacted my friend and we revived our "audio magazine" idea as a general pop culture podcast in 2007. We've been going weekly at AudioShocker.com ever since. http://www.audioshocker.com/

However, I struggled for years to find the right podcast forum to discuss comics on a regular basis. After tons of trial and error, I settled on two shows that focus on comics creation -- Sequential Underground and A Podcast with Ross and Nick.

14) Where can you be found you on the web if anyone wants more info?

NickMarino.net is the best place to find links to all of my work, as well as links to my social media profiles. http://www.nickmarino.net/

Also make sure to stop by the AudioShocker and give us a listen! In particular, make sure to check out Wayne's recent guest appearance on Sequential Underground #25. You dropped some serious self-publishing knowledge on that episode, Wayne!!! http://www.audioshocker.com/2011/09/21/sequential-underground-25-self-publishing-with-wayne-wise 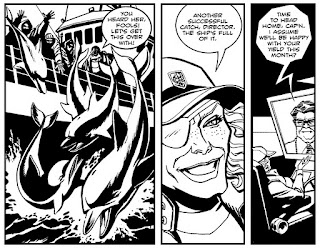 Taste of the Sea 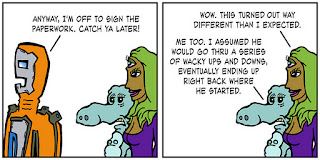 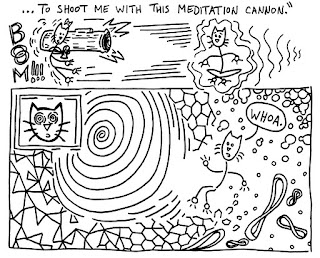