So in an effort to create more content for my blog I have decided to take advantage of the wide network of friends I have who self-publish in the comics field. I plan on submitting a list of interview questions about their comics to many of them. My goal here is two-fold. First is the completely self-serving desire to offer content and hopefully drive new traffic to my blog. The second is to highlight and promote work by people I genuinely admire. The questions below are a pretty standard list. As I move on with this project I will probably vary this to suit the various artists and writers I talk with. If you're interested in being a part of this, drop me a line.

First up is my guinea pig for this project, Marcel Walker. Marcel is a long-time friend and sometimes collaborator. He is the artist who took my little doodles and turned them into book covers for Scratch and This Creature Fair. I'll let him describe his work. Below the interview are a series of images showing his working process from initial rough sketch to full color final product.

The comic-book I was most well-known for, until the last year or so, was SMOKING GUNS, a mash-up of personal interests (noir-ish detective stories amidst a futuristic setting, at once idealistic and dystopian); currently I’m working on HERO CORP., INTERNATIONAL, a more ambitious project from the ground up. It’s to be a six-issue mini-series, following meta-agents (i.e. super-heroes) who work in a corporate environment, much like those we work for in the real world.

Currently, you can find my book in comic-book stores in Pittsburgh (notably PHANTOM OF THE ATTIC in Oakland and BILL & WALT’S in Downtown) and Chicago (at CHICAGO COMICS). It is also available online from COMIXPRESS.COM.

After I first read comic-books, it wasn’t gonna be anything else! I’ve found emotional touchpoints and methods of expression with graphic prose that are impossible to achieve within any other medium. That’s not meant as an insult to those other media; it’s just a fact. On some level, I enjoy exploring all forms of narrative and storytelling, and I feel a kinship with creators of all kinds.

But comics? I cut my teeth on them. I know them like I’ll never know anything else. And it’s a medium where you’re only limited by imagination and talent…and if you want to, you can do EVERYTHING to tell your stories, if you’re determined enough!

Inside of the comic-book field, Will Eisner represents what I most aspire towards. He had singular vision and foresight, tempered with practical sensibilities, and he was dedicated to the preservation of his craft. As both writer and artist, he was clearly a master of his medium, and his career stands as a testament to the power of sequential art. Otherwise…

Outside of the comic-book field, the influences are vast. However, I’m firmly of the opinion that Michelangelo would have made the BEST comic-book artist ever. And the first four books by S.E. Hinton really put the notion into my head that I NEEDED to start writing.

I like comics that reflect a specific sensibility. AMERICAN FLAGG by Howard Chaykin is an all-time favorite. I also liked his revisionist take on THE SHADOW during the ‘80s. Concurrently, I was a big fan of JON SABLE: FREELANCE by Mike Grell. (I’m showing my age with these answers, I know!) The first six or seven issues of THRILLER by Robert Loren Fleming and Trevor Von Eeden were great. I enjoyed the full run of HITMAN by Garth Ennis and John McCrea.

Alan Moore has such a reverent-yet-revisionist take on characters, I have a fondness for a lot of his writing. His THE KILLING JOKE is arguably my favorite comic of all time. (Also, you just can’t beat Brian Bolland for drawing anything!) WHATEVER HAPPENED TO THE MAN OF TOMORROW? likewise strikes some deeply emotional chords with me.

I can also never forget to mention Grant Morrison and Frank Quitely’s ALL-STAR SUPERMAN…’cause that’s how you make some comics, folks!

I graduated from the Art Institute of Pittsburgh in late 1989, having ironically attended in-between periods when they offered comic-book illustration as part of the curriculum. Other than that, I’ve learned from observation and dedication, and artists who have been gracious enough to allow me into their studios. “Self-taught” is something of a deceptive phrase – we all learn from someone else; it’s just a matter of picking the correct teachers, and being an attentive student.

It always starts with an idea…and sometimes they germinate for YEARS, during which time I’ll write notes and draw sketches. But once it’s time to get down to business, I tend to be pretty methodical. The current routine is to start with a scroll of paper thrown onto the floor of the studio, and laying out a story in black marker. This is the most free-form part of the process for me, and I’ll do everything from character design to page layouts to scripting dialogue to plotting future issues at this stage.

This may take a full day or two, and then I’ll create tighter individual thumbnail layouts from the best of my rough marker layouts. I scan and print these pencil layouts at the full 11” x 17” size, and they then become the basis for the full pencil artwork. I lightbox and finish the thumbnails to retain the looseness and “snap” from the original idea.

I then ink traditionally with a brush and Higgins ink. (I keep other inking tools around as well though, like tech pens and quill pens. One never knows…) The artwork is scanned and cleaned up in PhotoShop, then I add lettering in Illustrator. I know purists decry anything other than hand lettering, but I save that for specific things or effects.

My hands-on approach has also led me to print some of my own books as well. It’s safe to say I know a little something about do-it-yourself comics!

Honestly, not frequently enough! (Although, I also only promote when I’ve got something to promote, so that’s the hard part – keeping the work flowing.) I have the requisite aFcebook page for HERO CORP., INT’L, as well as a blog. The best networking though is just getting out into the world and meeting people, and being as fearless about that as possible. I try to attend conventions and expos whenever possible, even just as an attendee, and talk to other creators. I tend to spread the word about my stuff pretty thick when I’ve got something new to promote, and I’m not shy about it.

Often though, I’ve found good work tends to promote itself. Just over the last few days, some people who I thought knew I made comics found out about H.C.I., and asked for copies. I would have never predicted their enthusiasm! Apparently, they were passing them around between coworkers, because I had other people complimenting the work all day. THAT’S a great feeling!

That’s kind of like asking a parent, “Which of your kids do you love most?” The best answer I can give is one I heard a parent give in regards to child rearing: I love them both equally, but sometimes one will require more attention than the other.

If you’re familiar with my continuity (and if not, read the back-issues!), you know about my history of pitching to the majors. That said, I believe continual self-publishing, with an eye toward always improving your craft, is the most assured path toward finding work with a major publisher.

That said, in this day and age, with so many avenues of publishing available, self publishing opens up a LOT of avenues. Being creative doesn’t have to stop with the printed page anymore.

A self-sustaining career that flourishes.

Find me on that Facebook-thing. Or contact me at MagnificentMarcel@gmail.com. Or run my name through a search engine. I’m a pretty big deal; you can’t miss me! 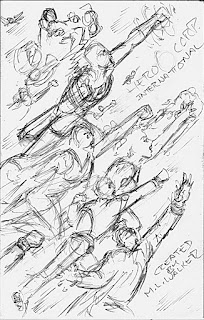 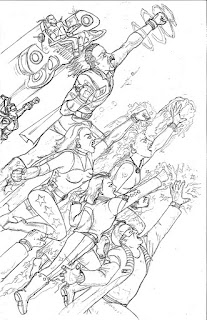 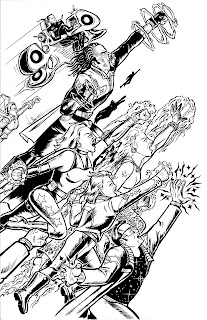 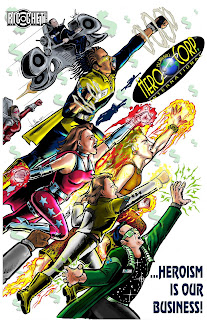