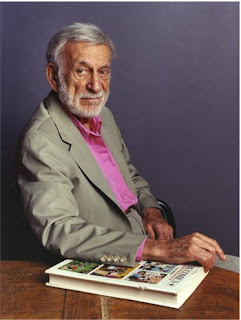 Tonight I was privileged to host an appearance/book signing at the Toonseum by legendary comics creator Jerry Robinson. For those of you who don't know, Mr. Robinson was one of the original artists on Batman starting in 1939. The creation of Batman is usually credited to Bob Kane (some smart legal wrangling on his part back then guaranteed that his name appeared on every appearance of the character), though most comics historians agree that Bill Finger was equally involved. Jerry was hired by Kane's studio as an artist and worked initially as an inker.

If that was all he had done he may have been forgotten, but Jerry contributed at least two elements to the Batman mythos that are essential. He designed the character of Robin and suggested the name (inspired by Robin Hood, not the red-breasted bird), and he created the Joker. 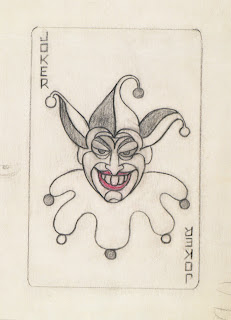 This is his original concept drawing.

There are many online resources that tell his story better than I can. A new book from Dark Horse called Jerry Robinson: Ambassador of Comics would be a great place to start. 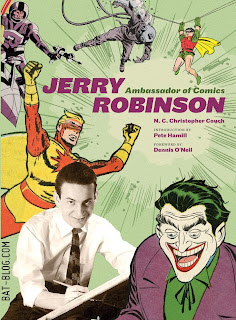 In his lifetime Jerry has been a comic book artist, a book illustrator, a comic strip artist, and an editorial cartoonist. He has worked in advertising and fine art. He has formed and presided over several organizations of illustrators. He was a scholar of comics long before anyone else was taking this art form seriously. He published a book on the history of the comic strip in the 1970's (it has recently been reprinted with new sections added to update the content to the present, all written by Jerry). He has been a lifelong champion of creators rights, most notably in the 70's when he helped spearhead the effort to get money from DC Comics and Warner Brothers for the creators of Superman, Jerry Siegel and Joe Shuster (two men he had worked with and been friends with for years).

Jerry is 89, and though a little frail, his mind is still sharp. He gave a slide presentation and regaled us with stories and anecdotes from the entire span of his career. I was supposed to interview him but I ended up asking very few questions. Though I asked him to elaborate on a couple of points for the most part he covered everything I wanted to ask in the course of his presentation. At the end, when I did ask him a couple of things he gave long, wonderful answers.

He was, quite simply, an amazing presence. Rarely do I find myself in the company of someone who awes me. I did tonight. His career, and more importantly his life, embodies so many of the things that have given my life meaning: art, writing, scholarship and integrity. It goes so far beyond his connection to Batman and any fanboy reaction I may have had (and I did feel a little fanboyish). At 89 he embodies a life well lived.

Thank you Joe and Rob and whoever else it was at the Toonseum who allowed me this honor and thought I would be the right person for the job. Thank you Jerry Robinson, for...

Thank you for living your life well, and sharing it with all of us through your art. You are an inspiration.