Busting Up My Brains for the Words

Fame... What you get is no tomorrow.

Or, as Neil Gaiman put it, through his characterization of Death, ‟You get what anyone gets... you get a lifetime.” 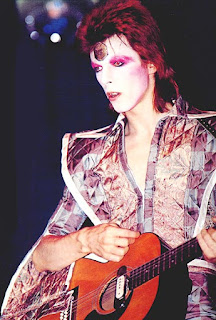 David Bowie died, and here I am, attempting to join the throngs of memorials being written about him. It probably goes without saying that I never knew the man. Why does his death affect me? Why does the death of a celebrity affect any of us? I still have everything I have ever had of Bowie, except the knowledge that he was alive. All most of us have of him is the music, art, and creative legacy he left behind. That will remain, and my life goes on with no real, personal loss at all. Yet I’m still compelled to add my tiny voice to the outpouring of tributes that have already appeared.

I came to Bowie around the same time most of America did, with his Rebel Rebel single. I was eleven when The Rise and Fall of Ziggy Stardust and the Spiders From Mars was released. Contrary to how the album is perceived now it didn’t leave much of a splash in America at the time. I was just starting to explore real music at this time. Rebel Rebel was one of the earliest Rock 45s I ever purchased (the actual first record single is lost to memory, but this was close). I discovered this around the same time I first heard Alice Cooper’s School’s Out (which was a couple of years old before I first heard it). These were the two songs that launched adolescent Wayne into the world of Rock fandom. The opening riffs of both of these are the two most primal rock hooks in my personal lexicon. Both are songs about rebellion against authority and societal standards. Perfect for a twelve year old.

Other than a few pictures I didn’t see much of Bowie at the time. I now know he was in the process of moving past the Glam persona and experimenting with his white boy American Soul era. I think had I seen more pics of the Ziggy era I might have been more into him from the beginning. As it was I really didn’t listen to a lot of Bowie in the 70s. As much as I loved Rebel Rebel and Fame (which I also bought on 45), I simply never invested in the albums. I remember looking at Diamond Dogs in the stores, but full albums were still a little beyond my budget yet. By the time I started really buying records I was hooked on Alice and KISS and a bunch of other 70s hit bands and Bowie had moved to Berlin and become too experimental for the radio stations I was listening to. As far as I knew he had completely dropped off the musical landscape. I don’t remember ever hearing Heroes on the radio back then.

Scary Monsters (and Super Creeps) was released in 1980 and pretty much escaped my notice at the time. I vaguely remember hearing Ashes to Ashes and Fashion as part of the radio background of the time, but I was taking my first tentative steps into New Wave and Punk right then and it just didn’t register for some reason. I saw the Ashes to Ashes video and thought it was pretty cool, but at the time my access to MTV was pretty limited, so it wasn’t as much of a constant as I know it was for a lot of other people.

Somewhere around 1981 I bought a used car, a blue mid-70s model Ford Granada. It had a factory installed 8-track player in it and the previous owner had thoughtfully left a copy of Heroes in it. At that point in my life that album was the most challenging thing I had ever listened to. I immediately fell in love with the title track (and, gun to my head, I may still consider it my favorite Bowie song, if such a thing is possible). But the rest of that album was a revelation and changed the way I thought of what Pop music could be. Not long after I bought Space Oddity, Ziggy Stardust, and Aladdin Sane and was promptly blown away. I was pretty primed by the time Let’s Dance blew up in America. Though I heard most of his other work in the 80s, I didn’t invest in his entire back catalog until the CD revolution in the 90s.

I only got to see him once, on the Sound and Vision tour in 1990. My first visit to Star Lake was to see the Starman.

Smaller moments... I was in a dance club called Tin Pan Alley in Wheeling in 1980, bored by the disco floor and too scared to talk to the girls there. There was a band in the upstairs room and the only thing I remember about them is they covered Space Oddity. The grad school apartment I shared with five other guys had a poster of the cover of Aladdin Sane in the living room. The first time I saw the Dancing in the Streets video with Mick Jagger was on the big screen when it was played before some movie I saw at the Edinboro discount theater.

I realized recently that I have spent more time as a fan of his first twenty years of work in the last twenty years than I was when it was new. And, like a lot of others, while I haven’t ignored his output since 1990, it just doesn’t resonate in the same way. I’ve read several biographies. I’m fascinated by his interactions with Marc Bolan, Iggy Pop and Lou Reed. I’ve read analyses of his lyrics and his concepts and recently an entire book of pretty heavily academic essays about him and his career. I’m currently reading a book called Ziggyology that is not a biography of Bowie, but of Ziggy, an attempt to pull together all of the musical and cultural influences that led to his creation.

So, I’m a little obsessed. The question is why. Why does this one person’s creative output lead me, and many others, to not just listen to his music, but to devour his career? Obviously, a huge part is the music. I like it. That’s pretty simple. It entertains me. I’m aware that there is a lot more going on in his oeuvre than there is in many other musicians I like, but I’ll leave it in the hands of those who are much more musically savvy than I am to talk about that.

For me, a lot of it is image. My two biggest life-long hobbies are comics and music. They were doorways for me. They opened on to a bigger world. They were the entrance to Narnia in the back of my closet. They were a TARDIS that took me away. They were the technicolor world of Oz in my sepia-toned Appalachian youth. I came of age in era where, at least for me personally, comics and music overlapped. Bowie, and Alice, and KISS, and Queen were superheroes, at least visually. My heroes, on the page and on the stage, were the weird outsiders that every teenager feels like. They showed me that the things that made them different were actually their strengths. What a great lesson. Loving the alien means loving yourself.

Somewhere in my brain, developing very slowly, is an entire thesis about identity and persona and costumes and personality and myth and pop culture and how these things relate.

Part of the genius of Bowie was that he showed us that we all wear masks and personas, and that it was possible, through these, to remain true to your authentic self. For all of his permutations of image, Bowie always followed his own path, distracting the world with style while creating his truth through art and music.

We will only ever know David Bowie through his masks and personas. Only his closest friends and family can say any differently. But through these characters and through his art we glimpsed a burning creative talent. We can simply enjoy what he gave us, or we can use it as an inspiration. We are all stardust. We can be heroes, forever and ever. The Starman that is waiting to blow our minds is our own potential for more.

And, as we’ve been told, if we sparkle he may land tonight.

I’ve been ending my blogs with a video. I’ve spent the day trying to choose the right one. In the end I decided it wasn’t about which one was exactly right, or summed up what I want to say in the lyrics. In the end it’s the one that made me a fan.

We like dancing and we look divine
You love bands when they're playing hard
You want more and you want it fast.

Listen to that guitar riff.