The second story in the Chutz-POW! anthology is actually two stories in one. Moshe and Malka Baran met in a displaced persons camp in Austria after World War II. They were married and spent the rest of their lives together. Though their experiences during the Holocaust were very different I thought it was important to tell them as one tale, linking their lives both before and after they met. Given the complexities of telling two stories in one this ended up as the longest story in the book at eight pages.


Here's the first page of their story with art by Marcel (M.L.) Walker. 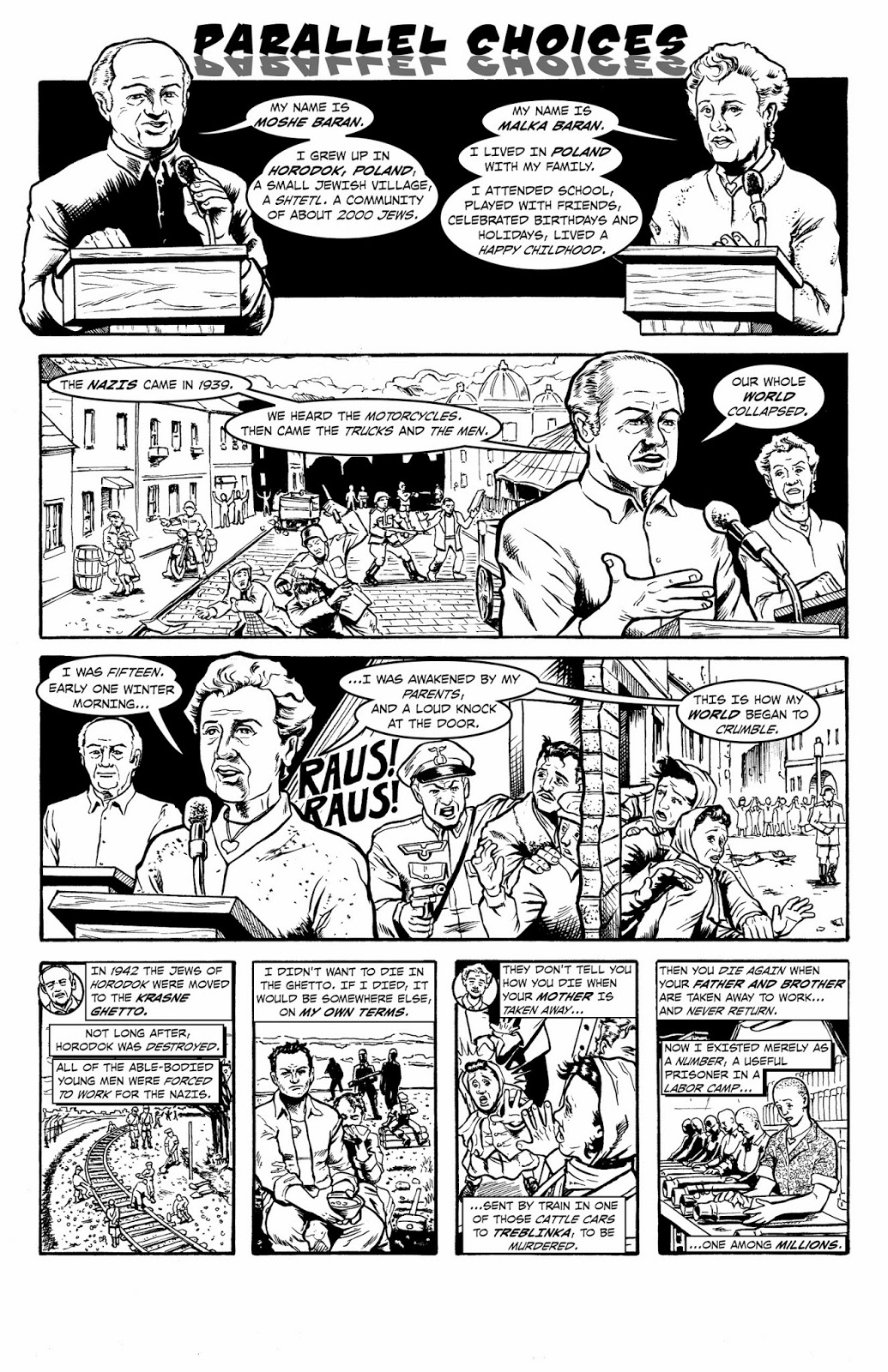 Moshe was a partisan resistance fighter. He lived in the forests and swamps of Poland for two years fighting a guerrilla war against the Nazis. One of the questions that people seem to ask when trying to understand how the Holocaust could have happened is, “Why didn't the Jews fight back?” Historically speaking there are probably lots of answers to this. Moshe's answer is direct and simple.

Malka was imprisoned in a labor camp when she was a young teenager. She spent over three years there, wearing the same clothes, forced to clean shell casings in a Nazi war factory. She survived until the camp was liberated. But there is another piece of her story that is so amazing that it sounds completely unbelievable, though completely true. It's the focus of the story in the book, so I won't relate it here in full, but...

Malka and the other women prisoners kept a small child in their barracks, hidden from the Nazi guards.

In all of the stories I tried to use the actual words of the Upstanders wherever I could. These were their stories and in most cases their words carried more weight and were more powerful than mine. In the case of Malka this was not only easy, but was also a joy. Malka was a poet and spent much of her life trying to communicate her experience through her art. In her written words and in interviews, both on paper and on video, she was elegant and powerful. For many of the panels in this story I decided to just step out of the way and let her speak.

The story was drawn by Marcel Walker and of all my scripts this is the one that went through the most structural change from the written page to the final artwork. Wanting to tell both of their stories in the same piece presented a structural challenge that was unique in this volume. I essentially wrote Moshe's story, then wrote Malka's. The question then was how to unite the two. In my thumbnails I played with having one of them in its entirety, followed by the other, then uniting them on the last page. I toyed with the idea of alternating pages, one at a time for each of them.

For the framing sequence I came up with the idea of the older versions of them speaking at an event, telling their stories to an audience. This allowed some leeway in the way the stories were presented.

Marcel read the scripts and rearranged the information I gave him, maintaining the stories I wrote but presenting them in a sequential order I hadn't considered. It made the story stronger (you can read his process blog about drawing this story HERE).

Marcel and I added a personal reference to the story.

My father, Keith Wise, served in the 7th Armored Division in World War II. He drove a jeep for his company Captain, William Borcherding.

In Moshe's narrative he relates how, near the end of the War his group of partisans joined the Russian army. He then recounts how they met the American Army near the Baltic in the first week of May, 1945. My father was there, so Marcel drew him into the story. 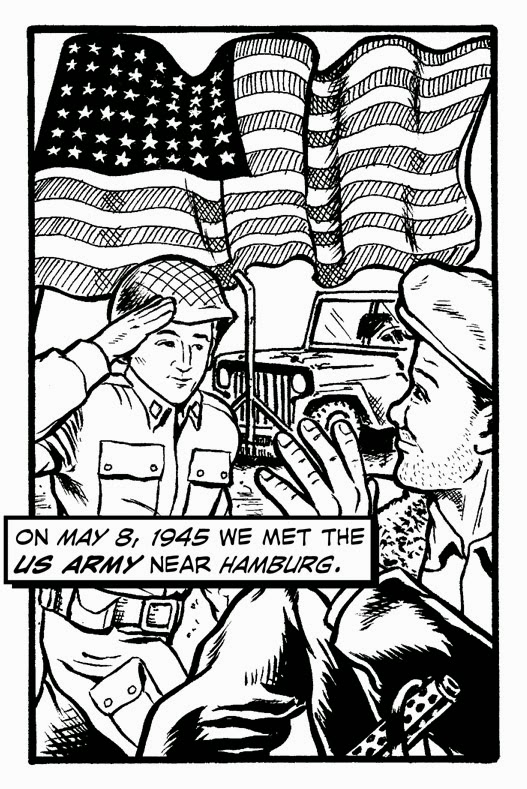 Dad has told me stories of meeting the Russians and sharing food and cigars with them. When I read Moshe's story I remembered those stories. Now I realize that the chances of Dad and Moshe actually having met are remote, but it made for a very personal connection for me that I felt I had to slip into the book.

Marcel Walker writes and draws his own self-published comic book called Hero Corps. You can read more about his work at http://www.marcelwalker.com/ 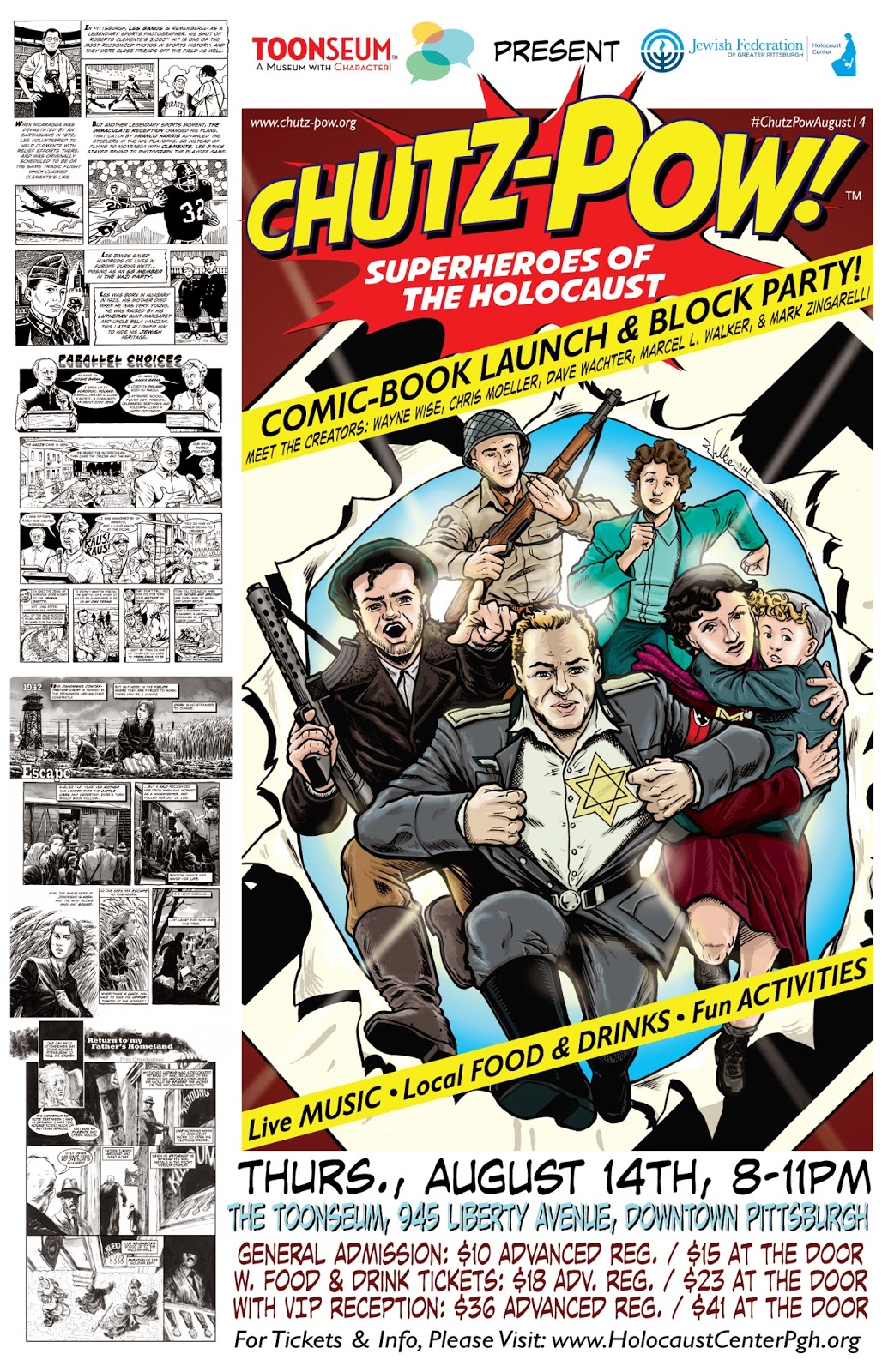