Love & Rockets (the comic book, not the band... for those who don't know, the comic came first), is very high on my list of all-time favorite comics, and one of the single most influential on my art style and approach to comics. Like a lot of books from this time period I didn't catch on immediately. My lack of access to a direct sales comics shop was the primary reason for this. It was only through the enthusiastic reviews of a couple of friends of mine who were more adventurous than I that I finally read L&R. I think I read the first four or five issues in one sitting. I've been a confirmed fan ever since.

While it's been on my list of books to write about for this project from the beginning, I have been hesitant to begin. A lot has been written and said about Love & Rockets, and I'm not sure what I have to add to the conversation. L&R by itself is a complex work, and my own reactions to it are complex as well. Trying to find a focus for this article has been difficult.

I have heard Gilbert and Jaime Hernandez, the primary creators of L&R, referred to as “the most important comics creators of their generation.” This is a generation that includes Frank Miller, Alan Moore and a host of other significant writers and artists, so that is a pretty remarkable judgement, and one I don't completely disagree with. It is not just loved by fans, and they tend to be rabid supporters, it is one of the most critically acclaimed comics of the last thirty years.

That wasn't always so. When the first Fantagraphics issue came out in 1982 a reviewer for Amazing Heroes, R.A. Jones, was less than receptive. I'll let his words speak for themselves; 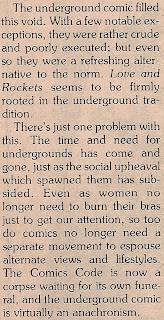 So, Jones seem to think L&R was dated and hopelessly rooted in the past, when what actually happened was that L&R was the vanguard of a new generation of comics creators. While thoroughly immersed in the comics traditions that came before, a much broader spectrum than the Underground Comix Jones refers to, L&R presented a unique outlook and voice that has changed the approach to what comics can be. Rather than a pastiche of a dated past it represented a future not yet fully understood or comprehended.

The reasons I feel this way are mixed in with my experiences of reading the book. But, there are a few things I can say in general. L&R was post-modern. The Brothers Hernandez (and in the earliest days of the book, brother Mario contributed as well), threw everything they knew and loved into their work. Their influences came from the traditional superhero comics, but they seemed to incorporate everything they read: Romance comics, Archie comics, Sci-Fi. Their characters lived in a world where everything that existed in comics existed. The day-to-day lives of the characters were the normal stories of people with jobs and families and relationships, but it was easy to imagine that the Fantastic Four were fighting giant space monsters just over the horizon, that you could run into Betty and Veronica at the local fast food joint, or that the neighbor kid was Dennis the Menace. As a comics fan of their generation who had grown up devouring all of these it was as if the Hernandez Brothers had delineated the world I had always lived in in my head, and somehow it all fit together.

And it wasn't just comics that served as an inspiration. Anything they were fans of made its way into the comic. Monster movies, music, television, and wrestling (particularly the masked luchadore tradition), all went into the mix. 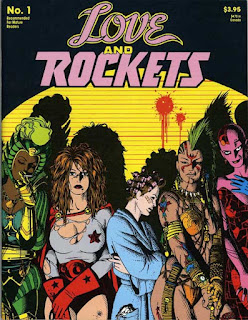 The cover of a police lineup of fantasy figures with a real woman in a housecoat summed this up. It was intriguing and stood out as being something very different than what we had seen on the racks before. 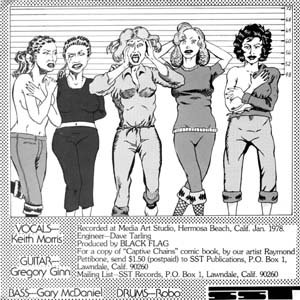 This drawing by Jaime was inspired by the Punk Rock artist Raymond Pettibon and his artwork for the back cover of the Black Flag single Nervous Breakdown.

The Hernandez Brothers were among the first distinctly Hispanic voices in comics. They related that cultural heritage in the form of traditional imagery and folklore handed down to them through older generations as well as through their own urban experience as Hispanic youths in America. Their approach was also multicultural. Though most of the primary point of view characters were of Hispanic origin they were not the only character types present, especially in Jaime's work. The Punk Rock culture of Los Angeles that provided the backdrop for his stories guaranteed that many other races and cultures were represented as well.

It's important to me to redefine the term multicultural for my purposes here. What I mean by Culture in this context goes beyond specific racial or religious backgrounds. I want to expand the definition to include any culture or sub-culture one finds oneself a member of, in this case specifically, Comics as a sub-culture and Punk Rock as a sub-culture (though there are many others included as well). If I were to completely simplify the primary themes of Love & Rockets I would say that it is the continuing story of the attempt to define oneself, within the strictures of the various cultures to which you belong and identify with, and against the expectations they bring with them. A recurring idea is that as characters grow and age, which they do in this series, they often become something they never dreamed of in their youth.

While the cast was large and varied, both Gilbert and Jaime focused on female point-of-view characters, and both managed to create some of the most fully-realized women characters in comics. Their protagonists were real, with a fully human spectrum of emotions, motivations, strengths and flaws. Unlike the standard, idealized superheroine form, the women who populated L&R also showed a full range of body types, and just like real people, their bodies changed over time.


They were also able to present the reality of human sexuality in ways that always felt real and not exploitive. There were characters who were straight, gay and bi-sexual, transvestites and transsexuals the polyamorous and the chaste. There were characters in committed relationships and those who were promiscuous. Characters were tempted and fell in love and fell in lust. Sex was presented as powerful, life-changing, emotionally messy, romantic, prurient, ridiculous, embarrassing, hysterical and confusing... just like it is for all of us in real life. It was a topic that stood on equal footing with everything else that went on in the characters lives. There are scenes I'm sure some people would view as pornographic (and the book is really not meant for kids, for a variety of reasons), but if L&R is porn, then so is the life of everyone I know.

L&R can be difficult for a new reader to jump into. Like Marvel and DC, at this point the L&R universe has a long history. Reading the latest installment has great meaning for me, but only because I have watched these characters grow for thirty years. They are old friends by now, and I know the back story that has brought them to their current place. If you don't know that back story, it's just events happening to strangers. Even though the series has been collected in various formats over the years it's not as simple as saying “Start at the beginning.” Unfortunately the original format and printing history can make it difficult to follow, though it has gotten better than it used to be.

L&R was originally a magazine-sized black and white comic. It is important to note, for those of you who have never read it, that its contents were never simply one big story. L&R was essentially an anthology featuring separate stories by each of the brothers. Over time both Gilbert and Jaime developed recurring casts that they focused on (loosely speaking, the Palomar stories and the Locas stories, respectively), but they both contributed tales in each issue that had nothing to do with their longer, continuing narratives.

It was obvious in the beginning, like many young creators, that they were experimenting and had not yet found their voices or their style. If you pick up the original issues, or read the original trade paperback collections that presented the issues as they first appeared, the experience can feel a little choppy and unfocused and are likely to make the uninitiated wonder what all the fuss is about. 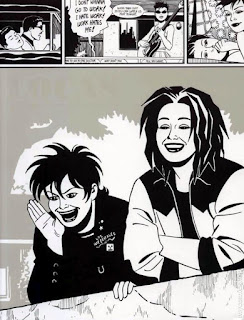 More recent collections have streamlined the experience, collecting each of the brother's main stories separately. 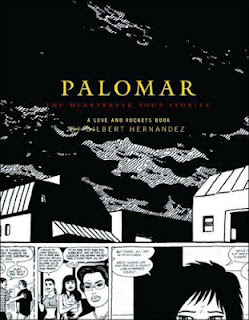 This is probably the best way to read the best work by both of them, or only the one you're most into, but all of the extra stories, those outside Palomar or Locas, are missing.

While not as essential, the lack of side characters like Errata Stigmata and the adventures of Rocky and Fumble lessens the overall L&R experience.


I'm pretty sure I haven't done justice to the series. It's difficult to talk about just why this book has been so important to me. Part of it, the part that a new reader simply can't experience, is the concurrent growth of the series with my life. These characters have been with me for thirty years now. As the circumstances of my life have changed, as I have grown from a twenty-something to a fifty-something, these characters have gone through similar changes. They feel like old friends, friends with whom I have an investment of time and emotion. I go about my life and they go about theirs, and once a year or so we get together and get caught up, discovering what has happened in the meantime, and learning more about each others journey. To new readers my old friends are simply strangers with an interesting past. For me, they are people I have shared the road with, just like real people in my life. There is a difference between hearing someone's story and feeling like you have shared it.

It's impossible to talk about L&R without considering the contributions of Jaime and Gilbert separately. While both are instrumental to the overall feel of the book, they are, in the end, very different creators. I plan on spending time with both the residents of Gilbert's Palomar and the cast of Jaime's Locas in the next couple of posts, reminiscing with these old friends of mine. I hope I can convey why I love them.

Love and Rockets and all associated characters are copyright by Gilbert and Jaime Hernandez.
Posted by Wayne at 10:56 AM