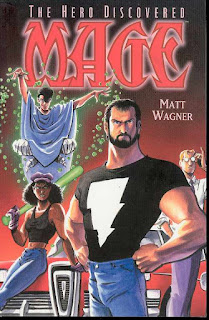 As I said in some detail recently, I discovered the work of comics creator Matt Wagner through the black and white issues of Grendel. Because I was so enamored of it I picked up the first issue of his next series, Mage: The Hero Discovered without hesitation, even though it looked like a very different kind of project. In the course of my life in comics there have been very few that rank as highly in terms of ongoing influence, or simple enjoyment. Last year, when I had the opportunity to choose the graphic novels I wanted to write about for Salem Press's CriticalSurvey of Graphic Novels, Mage was my first choice. I was thrilled to get that specific assignment. The article is a more academic approach to the topic than I plan on going into here, but if you want to read it go to http://salempress.com/Store/pdfs/Mage.pdf. All of the details of the story and character are covered there.

So, what is it about this series, among all the multitude of comics that I have read, that struck such a chord with me, and continues to do so? Good question, with a lot of answers (or quasi-answers, anyway).

Matt Wagner and I are contemporaries, in terms of age (he's like three or four months younger than I am, if memory serves), if not career. We grew up, obviously reading a lot of the same comics and books and loving a lot of the same influences. I say obviously simply because of the ideas that show up repeatedly in his work.

Let me try to be more specific about something that is probably too big to be specific about. As I've said repeatedly, I learned to read from comic books. There was Archie, and Dennis the Menace, and other “kid-friendly” funny books, but there was a tremendous amount of superheroes as well. This interest in heroic fiction has been a through-line in my reading interests and in what I create ever since. I “graduated” from comics to books pretty quickly. The Howard Pyle version of Robin Hood was one of the first real novels I ever read (third grade, if I'm not mistaken). I can't tell you how much I was into this when I was eight years old. The sense of adventure, the fun, the action, all of it added up to enthrall my imagination. I think it's safe to say that this experience was instrumental in Hawkeye, the archer from the Avengers, being my favorite superhero (and why Hawkeye instead of Green Arrow, the more obvious Robin Hood archetype, is another blog).

I also remember reading tales of King Arthur and the Knights of the Round Table. I also read stories from mythology. I read a lot of historical fiction aimed at kids. And I read Comics. All of these ingredients went into the gumbo of my imagination, so it's evident to me why I have always seen them as connected. Superheroes have always been, to me at least, the 20th century iteration of myth and legend, of heroic fiction. 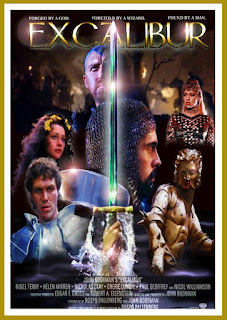 So let's jump to the early 80's. I saw John Boorman's Excalibur in the theater in 1981. The imagery completely blew me away and reignited my interest in Arthurian fiction. At this time I was pretty immersed in fantasy fiction anyway, thanks primarily to Lord of the Rings. Even then I knew that some changes had been made to the Arthurian mythos, at least the one I was familiar with. In the film it is Percival who is with Arthur at his death, and who throws Excalibur back into the lake from which it came. While I loved the movie, this confused me, simply because in all of the stories I had read it had been Sir Bedivere in this role (read my ebook Bedivere for my take on the legend). I wasn't as aware then as I am now of how different movie adaptations are from their source material (and at times have to be). I also wasn't as aware of the wealth of Arthurian fiction available. In my mind there was only one story. I had no idea of how the King Arthur tales grew over centuries and had been written by many, many hands, each of which reflected the times they were written in. There is no one core King Arthur story, only a collection of different writings, all of which deal with the same characters, tropes and archetypes. The enduring longevity of these stories, I believe, is because the core issues they deal with remain core issues for people no matter where or when they are from. The eternal issues of duty versus personal interest, what it means to love, the quest for deeper meaning still ring true for people.

Of course, as the world moves on the stories need to grow in ways that still speak to the current world. All enduring myths go through this process (see the book Transformations of Myth Through Time for more on this). 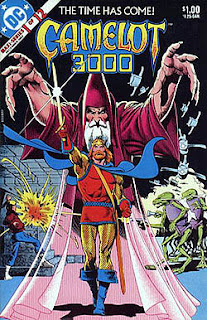 The first comic book series that really opened my eyes to this idea was Camelot 3000 by Mike Barr and Brian Bolland, published by DC as a 12-issue maxi-series. In retrospect this series has a number of problems in terms of storytelling and themes, but at the time I really loved it, and it still ranks pretty highly in my echelon of comics, more for nostalgia of what it meant to me then, in full acknowledgement of its faults. In the big picture, Camelot 3000 was more important to me in firming up my interest in the Arthurian myths than in influencing me in comics. This story showed me how you could take the characters and themes and transplant them to a new setting and make them work. It also introduced me to the story of Tristan and Isolde. While I had heard the name Sir Tristan in conjunction with King Arthur, he was not one of the knights who stood out to me as having his own story. The subplot of Tristan/Amber March was my favorite part of Camelot 3000, and led me to researching the core story, and reading many more variations on it over the years. The romance of Tristan and Isolde has become my favorite of all the Arthurian tales. It resonates with some real-life aspects of my life and speaks to my sense of love and tragedy and sacrifice in ways that are probably too psychologically telling.

But, as much as I liked it, Camelot 3000 was primarily a retelling/rehash of the original stories that brought very little new, other than green-skinned aliens and transgender characters, to the tales.

Then I read Mage. The Arthurian connection was not made manifest in this series immediately, and though hints were sprinkled throughout the narrative, it was only revealed near the very end of the story. When the series began it was more of a tribute to classic superhero origins. Kevin Matchstick, who wears a t-shirt with a Captain Marvel lightning bolt symbol on it, gains superpowers thanks to an encounter with a magician, just like Captain Marvel. It was only later that the magician, Mirth, was revealed to be an incarnation of Merlin. He certainly didn't look like any standard version of Merlin (like the one in Camelot 3000 did).


Over the course of the series we saw the tropes of the superhero genre skillfully interwoven with classic Arthurian memes, creating, as a result, something new. This series accomplished what I had always believed... comics as modern myth.

There were certainly no shortage of precedents for mythic characters in comics. But for the most part, prior to this, the mythic characters succumbed to the tropes of superheroes more than the other way around. Thor, for all of the Asgardian trappings, was a Marvel superhero far more than he was ever really a god. Don't get me wrong, I love a lot of the old Thor comics. But at Marvel, the character was stripped of much of his truly mythic resonance in favor of tights and fights. He was an old god in a new milieu, but, for me at least, he never spoke to my personal experience. The same was true for most of the “gods” that appeared as comic book characters (that includes Kirby's New Gods, an overt attempt to create a modern pantheon).

Mage spoke to something more personal. It wasn't a retelling of the Arthurian stories. It was a recognition of mythic patterns in modern life. The fact that the way Kevin Matchstick looked was based on Wagner said that the things that happened in the story were, in some way, fictionalized autobiography. It said that Myth wasn't just a collection of musty old tales from the past that had no relevance to modern life, but that it was something that was still alive, and that with open eyes, we could see these patterns in our own lives.

That idea alone brings a little bit of magic to the mundane (and isn't that what I was looking for in my interest in comics and speculative fiction anyway?).

Not long after that I was introduced to the ideas of psychologist Carl Jung ( I was a Psychology major, after all). The first book of his I read was Man and His Symbols (which is probably the best place for the newcomer to his work to start), and doggone if a lot of these ideas about the nature of myth weren't present in his work as well, long pre-dating either me or Matt Wagner. From Jung I went to the work of mythologist Joseph Campbell. I first heard of him from his famous series of interviews with Bill Moyers that appeared on PBS around that time. These were collected in print form as the book The Power of Myth. There have been very few books in my life that have been more influential. There are lots of books (many by Campbell), that cover the topics in far more exhaustive and academic detail. But, for me, this served to give me a specific framework of thought for a worldview I had always intuited but didn't have the words for. It's still pretty much my default framework for a lot of what I do.

The key idea I took from all of this is what I said in my article about Mage:

“Myth is not just a story, but a roadmap; the goal of one’s life journey is to discover the myth one is living. By being aware of these themes, readers can recognize and discover the hero within any life, including their own. Matchstick does not simply accept a destiny—he agrees to take an active role in creating it.”

And that's what Myth is to me. Since then I have read a bunch of psychology books that deal with this theme. But Matt Wagner was doing it in fiction, in a comic book, before I ever saw any of this. He was taking themes of mythology and folktale and weaving them into his personal life in a way that created art.

There are a lot of other aspects of Mage I could talk about. While writing the Salem Press article I thought of a number of things that deserve looking into in greater detail. But, this has gone on long enough, and those are probably bigger articles (or maybe papers).
Posted by Wayne at 11:10 AM