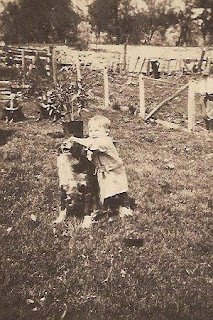 My Dad, Keith Wise, turned 92 years-old on Thursday, June 3rd. To save you doing the math, he was born in 1919. There is no way I can do justice to the life he has lived, so I won't even try to tell his whole story here. 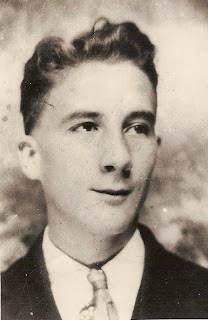 I don't see much of my looks in him. I take more after Mom's side of the family, at least in terms of hair color and body type. My brother and his kids and grandsons look more like Dad than I do. My grandfather, Jim Wise, who I never met, had bright blue eyes. My brother and his kids all inherited those. My grandmother, Ida Wise, passed her dark, dark brown eyes to Dad and me. 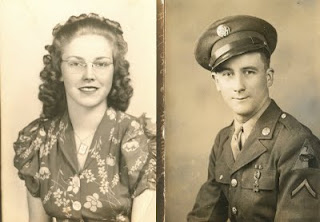 Mom tells me she knew when she was 5 years old that Dad was the man she would spend her life with. They grew up in the same hollow (the one I wrote about a couple of posts back). I've heard stories of both of them dating other people, but they always came back to each other. This is Mom's high school senior picture.

Dad went into the service during World War II. I'm not sure of the exact dates and neither is he. He went through basic training and saw the country. He was in the 7th Armored Division in General Patton's Third Army. While in California he got the job of being driver for company Captain Milton Borcherding (and if this name rings a bell or if anyone can tell me anything about him, please do. Dad lost track of him after the War and would love to know). Even with the difference in rank (Dad was a private for most of the War, though he was promoted to Corporal at some point), he and Borcherding developed a friendship.

Dad doesn't talk much about his War experiences, and when he does it's more about the good things he remembers; Playing baseball in France as they were waiting to be shipped back home, the German girls he still likes to tease Mom about. But, he was on the front lines. He went to Europe in August of 1944, missing the D-Day landing by 2 months. He drove his Jeep across Europe, escorting the tanks of the 7th Armored. He tells stories of working as a liaison, which meant running messages between camps in the dead of night in the German countryside. He slept in his Jeep in the freezing cold of Christmas Eve at the Battle of the Bulge. He shared cigars with Soviet soldiers on the Russian border.

And he came home, unscratched. Before he went into the service his Dad gave him a silver dollar to carry for luck. It must have worked. At the end of the war, in Paris, he had the silver dollar made into a ring with his initials, KW, inscribed on it. As I was growing up the ring was always on his finger. I never saw him take it off. Sometime in the mid-90's, in his completely non-ceremonious way, he pulled the ring off his finger, handed it to me and said, "Do you want this?" It's been on my hand ever since.

He came home and went to work. He drove a dump truck for 25 years or so, then worked at a Limestone plant in Benwood West Virginia until he retired. That was 25 years ago. He hasn't stopped moving since.

It took me a long time to recognize the traits I have in common with him. I have always been more of my Mother's son than my Dad's (and I think it's fair to say my brother has always been more of Dad's son than I). That's based more on personality types than any real differences between us. Dad lives in this world. He is a man of the earth, based on the here and now. I've always lived in a fantasy world of some kind or another. Dad never really understood the comics or the books or the art, or to be honest, most of the things that drove me. To his credit, he never actively discouraged those things either. It was always more of a bemused shrug than a blockade.

Over time I realized it was easier for me to go to his world than it was for him to come to mine. In my teens I got heavily involved in his world of Field Trials. In brief, these were dog races. Not the Greyhound around the track kind. These grew out of the coon and fox hunting traditions. I can't really describe what these were in this post (maybe that will be another blog). Suffice to say, we had a lot of different dogs when I was growing up. Taking care of them and training them was something we shared. At a time when fathers and sons are typically at odds (and Dad and I had our share of flare-ups, though nothing that was ever really serious), no matter what else we may have disagreed on, we always had the dogs in common. Every Sunday, from March until October, we would get up early, load up the truck and drive somewhere together to a race. It was a bonding experience I treasure. 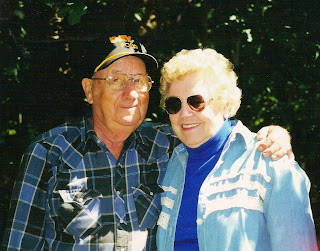 This pic is from a few years ago. Dad and Mom are still together (she's 88), and they are, for the most part, still in good health. Dad takes a walk of a mile or two through the woods every day. Two weeks ago he had a cataract removed, the first serious medical procedure he has ever undergone. He still drives, and drives well. He was forced to renew his license last year because of his age and passed with flying colors. He has lots of friends and is loved by everyone who knows him. He is a Zen master, though he wouldn't know what that meant if I said it to him. He is a force of nature. As different as we are he taught me how to be a man. He loves more quietly than I do, but just as fiercely.

Email ThisBlogThis!Share to TwitterShare to FacebookShare to Pinterest
Labels: Dad